A busy time of the year for Lovetts 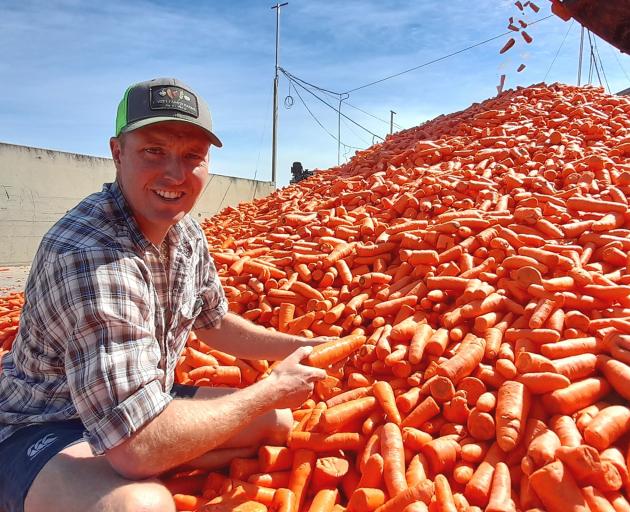 The company, owned by Daniel and Emily Lovett and Daniel’s parents, Joanne and Greg, has a full-time staff of 15 people working with product in the field, the office and the packhouse at Wakanui, near Ashburton.

At peak season they can have up to 50 additional staff helping in the process to get products to varied markets.

Their diverse range of crops are spread around 1000ha of farmland paddocks throughout Mid Canterbury. They grow in coastal climatic soils to inland paddocks 300m above sea level.

Daniel, who with wife Emily have three young children, is the third generation of Lovetts who have farmed in Mid Canterbury.

His grandparents, Stuart and Nola, were sheep and crop farmers in the Newlands area, near Fairton, north of Ashburton.

Father Greg bought the family farm at Wakanui, which is where the main Lovett Family Farms operation is based.

The Lovett business plan is simple: produce high-quality produce for their buyers with outstanding delivery. And it works. They have domestic and export markets for all of their diverse products.

But stricter rules and regulations, mostly around environmental issues, as well as the cost of compliance, were making it harder to farm, Daniel said.

They, like many farmers, were environmentally conscious and had acute awareness around nutrient loading, crop rotation and water use.

The Lovetts already do an annual nutrient budget and Farm Environment Plan, which will become mandatory across the country soon, and they are Global Gap (Good Agricultural Practices) certified.

Their main crops are potatoes and onions which are heading for McCains and to domestic and export markets, respectively.

The potatoes were planted at Wakanui, Pendarves and Lauriston and once harvested, if not used fresh, get stored in humidity controlled storage.

Of late the biggest issue had been tomato potato psyllid, an insect which infects potatoes causing them to turn black when cooked.

The insects, originally from Central and North America, were found in New Zealand in 2006 and were now widespread throughout the country.

The border control issue had now cost growers in preventive measures or face penalties from processors if potatoes were found infected by the pest.

Onions, harvested from December through until April, were sorted at the packhouse and ranged in bulb size depending on customer need, from 35mm to over 90mm.

They were packed in bags sized from 5kg through to 1.4 tonnes.

Other crops include peas, specialty seeds and wheat and barley used for break crops.

They also have 100 hinds which eat waste product from their operations.

The carrots were destined for juice and puree processor Juice Products New Zealand in Timaru and then to Japanese markets.

In Japanese markets, tropical fruit drinks are made up of 50% carrot juice, unlike elsewhere in the world, where they are 50% apple juice, Daniel said.

Carrots fit in with the family operation, Daniel said, with machinery, staff and facilities used throughout the season.

Land preparation started in drier conditions post-winter with the main planting in September.

Harvest ran from February and spanned throughout winter and into September.

They were dug fresh each day and washed in a plant capable of washing 40 tonnes of carrots per hour.

They also grow six different varieties of blackcurrants, harvested in January and grown for the New Zealand Blackcurrant Co-operative and used for their health properties in a range of products, including in powder form. It is the only fruit they grow.

Blackcurrant is popular with athletes to help improve exercise performance and recovery.

Daniel uses it himself during his own sporting endeavours.

He recently completed the swim leg of the Wanaka Ironman team challenge for the second time.

Lovetts have grown the fruit for nearly two decades and originally grew fruit for market with Ribena.