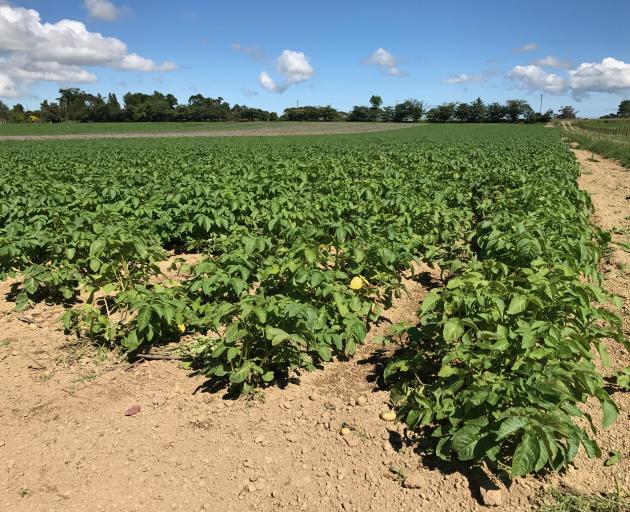 New Zealand-grown potatoes are at threat due to large quantities of European fries imported into the country. PHOTO: CENTRAL RURAL LIFE FILES
An influx of European potato fries into New Zealand has already impacted on domestic growers, with less product planned for growing and staff job losses.

Hewson Farms, in Mid Canterbury, grows on average around 350ha of potatoes a year as part of its operation. It grows a large tonnage for McCain Foods, but it also grows onions, wheat, ryegrass, clover, hybrid vegetable seed, seed carrots, beetroot, hybrid rape kale and linseed.

Director Ross Hewson said the influx of European fries into New Zealand, as shown in New Zealand trade figures, resulted in more than 40 containers of product flooding into the domestic market.

There was an even larger influx into Australia, he said.

McCain Foods responded to the glut in product by limiting volume being produced to supply to the market this year.

As a result, Mr Hewson said the company had reduced the number of permanent employees it has in response to tightening market conditions, increasing costs of labour, inputs and compliance.

Evidence given by industry members, such as Mr Hewson, in the Potatoes New Zealand (PNZ) Pandemic Industry Recovery Plan application, completed in September, has prompted the Ministry for Business Innovation and Employment’s (MBIE) trade remedies team to launch an investigation into the threat posed by surplus frozen fries being imported into the country.

Mr Hewson said with New Zealand jobs and livelihoods at stake there was a "very clear case for MBIE to investigate".

He praised the backing of quick service restaurants such as McDonalds, which had spoken out and voiced their support to only use locally produced product in New Zealand and Australia.

"It sets a benchmark we hope all New Zealand food retailers such as Progressive and Foodstuffs will be supporting," he said.

At the time the surplus in Europe was 1.5million tonnes, but latest figures were estimated at 2.6million tonnes and growing due to the impacts of further lockdowns in parts of Europe.

The situation was not unique to New Zealand’s potato industry, with those in the United States, Australia and South Africa also calling for duties or actions to limit or enforce anti-dumping measures.