Fields of courgettes wasted as grower can't get workers 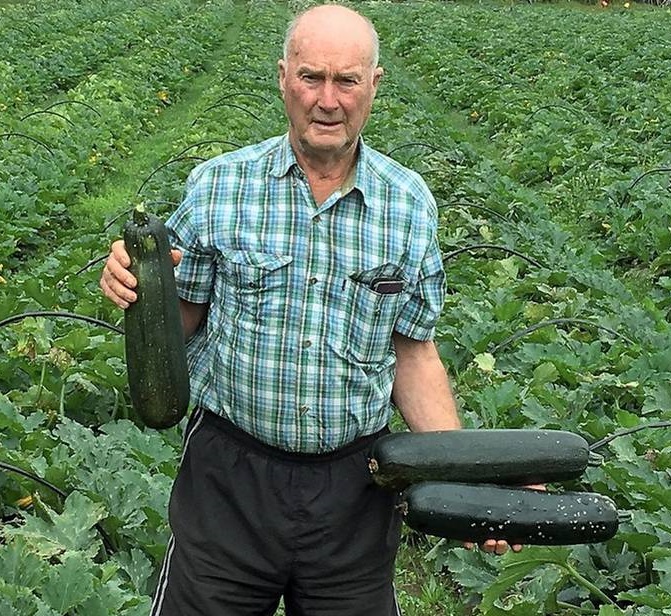 Courgette grower Brett Heap in a field where the vegetables were not picked. The courgettes have blown out to become unmarketable marrows. Photo / David Fisher
Brett Heap is surrounded by food gone to waste - rows of courgettes he couldn't get picked because his expert and specialised workforce can't get into the country.

His story is a peek behind the curtains of a looming disaster everyone saw coming and - it appears - no one knows how to solve.

New Zealand is heading into peak harvest season and there aren't enough workers to get fruit off trees or vegetables from the ground.

"This could be my last crop," says Heap, who grows courgettes near Waipapa in Northland. "I'm at the point where I'm not going through it again.

"I can accept losing a crop with weather, or disease, or water damage. I have real difficulty accepting I'm on the point of getting out of the industry because the Government doesn't care."

Agriculture Minister Damien O'Connor would surely argue that he does care. He declined to be interviewed on the issue with a spokeswoman saying the issue was still before Cabinet and he would be meeting horticultural industry leaders next week.

And yet it is an issue that has been flagged since New Zealand came out of lockdown in May and now the country is well into picking season - with no one to pick fruit.

There have been incremental changes - visa extensions for workers trapped in New Zealand - but now the time to pick fruit and harvest vegetables has arrived and there is no one available to do it. 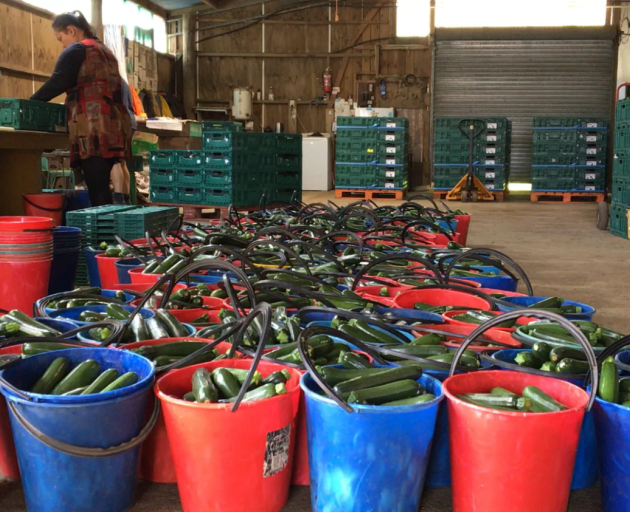 Courgettes being sorted for distribution to supermarkets across the country. Photo: David Fisher
Heap knows Horticulture NZ - the industry body - has raised it and he knows bureaucrats and ministers in Wellington are aware of the issue and have held extensive meetings about it.

All that talking hasn't got his courgettes off the ground and into shops, where they fetch about $6 a kilogram as we enter summer (or an astonishing $30 a kg in winter 2019).

To do that, he needed about 10 staff who are in Thailand and unable to travel to New Zealand, as they have done for years through our Recognised Seasonal Employer scheme that brings in about 14,000 workers from other countries.

The scheme formalised the Wild West of illegal employment that Heap remembers as featuring dawn raids and labour inspectors snooping along hedgerows.

It allows those from other countries - mainly the Pacific but also Thailand and Malaysia - to visit New Zealand for specific seasonal work. The staff who came to work for Heap were among the 418 workers who came from Thailand last year.

"The thing that's hard to handle for me is the dishonesty from Government and the lack of effort. The Prime Minister said we were an essential business. They've made no effort to get RSE workers into the country so we can carry on.

"They've got all the excuses and nobody challenges them on it. All of us spring harvesters have been hung out to dry." 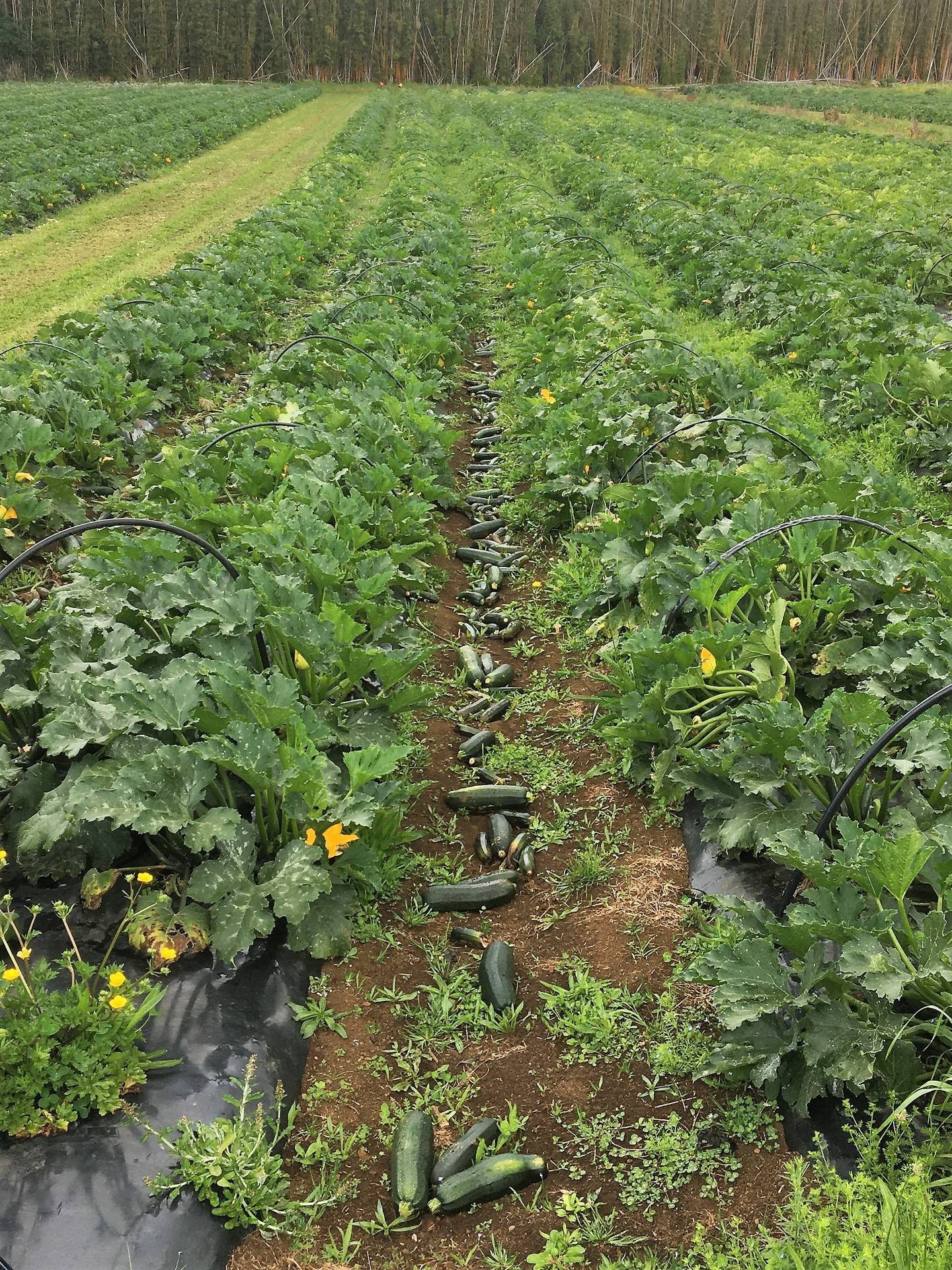 Courgettes too big to go to market left lying in waste. Photo / David Fisher
This year, Heap planted 60,000 plants where he might usually plant 100,000. The level of planting was partly due to a lack of staff and partly caution He cobbled together a workforce through locals and Thai agricultural workers resident in New Zealand.

But it's no way to go forward - and the lack of any concrete plan means he can't plan for his business.

Heap said he can't understand why he and others couldn't manage quarantine, starting with a negative test before boarding a plane to fly to New Zealand, transport to the property on which they worked and isolation at that property and tests to confirm Covid-19 free status.

Government talk of employing New Zealanders was a "fallacy", he said, with those in New Zealand usually unable to cope with hard, outdoor work and lacking specialised picking and plant-care skills developed by returning RSE workers.

It also failed to account for the intensive nature of the picking season, where workers aimed to pick courgettes at their optimal size to meet market demand, providing shoppers with the ideal size.

If they were picked too small, the courgettes were worth less. Left too long, they grew to marrows for which there was no market.

For Heap's business, it was geared to Thai workers with specialist knowledge that reduced waste and maximised profitability.

"They have been here year after year. They know what they're doing. They hit the ground running."

With their focus on the short work period, the RSE staff worked the two-to-three month picking season with seven-day working weeks and working days that begin at dawn and finish on dark.

"My labour costs are through the roof. I believe if I'm in business I have the right to do the best that I can. I'm not allowed to do that at the moment."

Hort NZ chief executive Mike Chapman said it was incredible to be facing a harvest season with unresolved issues that were known about six months ago.

Chapman wrote in May of the need for RSE workers. To now be in November with no plan to solve workforce problems was staggering.

"We haven't slowed down our campaign to say we need to have the borders opened."

The importation of Covid-19 with Russian fishing crews recently was "definitely unhelpful" but didn't undermine the case for industry-led managed isolation and quarantine, he said.

"We're not even asking Government to pay for it."

Chapman said productivity across the sector was down 20-30 per cent currently and the lack of labour meant it faced a $1 billion earnings loss.

"This Government is just completely out of touch with the reality of labour supply."

Minister of Immigration Kris Faafoi said "strict border controls" was a large part of limiting community spread of Covid-19 and "New Zealanders have made clear they value careful management of our borders".

Faafoi said the Government continued to review workforce needs and was considering visa changes for those already in New Zealand. Changes to date had allowed about 6500 RSE workers to stay in New Zealand, and given about 11,000 working holidaymakers extensions to work in horticulture and viticulture through to June 30, 2021.

He said Covid-19 meant "we are not able to operate in a world where it is business-as-usual" and it meant sectors needed to find ways around a reliance on offshore workers.

He said that included "offering better work conditions" and finding other ways of "attracting, training and retaining workers".

Funny enough this what happens when you rely on cheap foreign to labour instead of investing in and developing the local work force. When the taps turned off it dries up.

It's not as if it's occurred suddenly either , the virus hit months ago. What have they been doing to attract and train locals in the meantime? Anything? Or have they been just waiting , hoping it would pass in time? Now it is time they blame the government instead of themselves.

Surely foreign workers working 7 days dawn till dusk isn't the answer. Sounds like terrible working conditions to me. No wonder kiwis don't want to do our seasonal horticultural work. Time to create a fair and self sufficent food system in this country.

What surprised me about this article was that the courgette industry was so large. These plants are easy to grow. I've grown a couple of plants every year for the last 40 years and I can assure you I'm no green thumb. We have more than enough courgettes to feed ourselves and some left over to give the neighbours. I've never ever thought of buying them.