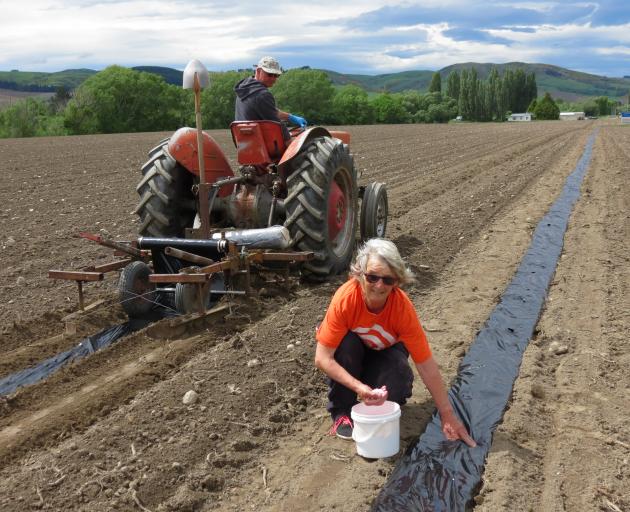 Darryl Peirce, of The Pumpkin Place, near Millers Flat, lays plastic in rows, while Raewyn Officer, of Lake Roxburgh village, plants individual grey pumpkin seeds on the 4.5ha block on Saturday. Photo: Yvonne O'Hara
Raewyn Officer, of Lake Roxburgh Village, intends to plant a 4.5ha block of land with about 30,000 grey pumpkin seeds, by hand, by herself, and she is happy to do so.

She works for Darryl Peirce, of Peirce Orchard (The Pumpkin Place), near Millers Flat, who has leased a 4.5ha paddock that lies between Ettrick and Millers Flat.

When Southern Rural Life spotted Ms Officer planting the seeds by hand on Saturday morning, Mr Peirce had already cultivated the soil and had laid one row of black plastic the length of the paddock, using an attachment on the back of his tractor.

He intended to do the same over the whole block, with each row 2.5m apart.

Ms Officer then used a implement to make holes in the plastic at regular intervals, and planted the seeds by hand.

It was expected to take about a week.

''I have done it for four or five years, and I like working in the fresh air.''

She said her back would be a bit sore by the end of the day, but it would not be ''too bad''.

Mr Peirce praised Ms Officer as she was an excellent worker, ''but don't tell her I said that''.

''Each vine will produce three or four pumpkins.''

He said there was provision for irrigating the crop when needed, and the plastic prevented the weeds from growing.

They will start harvesting in December and January, depending on the season.