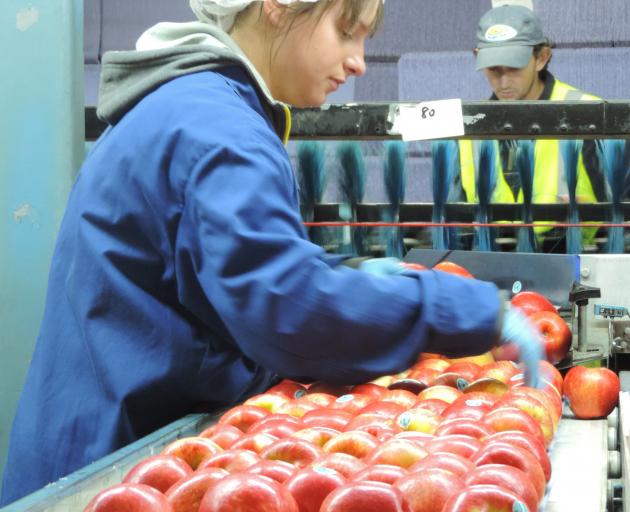 The effect of any loss of harvest this season would roll on into the 2021-22 season. Photo: Allied Press files.
The impact of looming labour shortages in the horticulture and viticulture sectors in Central Otago is expected to spiral into the industries that service them, leaders say.

Fuel, packing, transport, coolstore, port and chemical suppliers and operators are all bracing for a season that may not go plan due to Covid-19 and a dearth of recognised seasonal employer workers and backpackers — the backbone of both sectors’ workforce.

‘‘If the sector is unable to hire enough Kiwis to fulfil all available roles, a potential outcome would be reduced volumes through the entire supply chain, from orchards through to pack houses and cool stores, which in turn could impact export apple volumes and the value returned to New Zealand.

‘‘We don’t want to see this happen, as the primary sector is pivotal to accelerating New Zealand’s economic potential.’’

‘‘Our business very much revolves around the activity level of our client base.

‘‘If there is going to be something that reduces that activity, i.e. labour shortages, it will have an impact — if they are busy, so are we.’’

The company had already scaled back some activities, particularly supplying the tourism sector, but had not yet budgeted on any reduction in supply to the primary sector, Mr Harvey said.

‘‘Certainly, it’s very concerning about what lies on the horizon.’’

Fruitfed Supplies national manager Duncan Fletcher said Fruitfed — the horticultural chemical supply arm of PGG Wrightson — shared the concerns of growers.
‘‘We rely on clients being successful and having an income.’’

The effect of any loss of harvest this season would roll on into the 2021-22 season, he said.

‘‘Some of the producers we supply in the wine industry only come to us post-harvest.’’

In the predicted worst-case scenario of a 50% reduction in harvest it could mean the loss of three to four jobs at his branch alone, he said.

He estimated 25% of his business came out of Central Otago, but the company had branches across New Zealand.

‘‘I’d say throughout the country it’s going to be felt.’’

Transworld Roxburgh co-owner Geoff Smith said any loss in apple production would make a ‘‘significant dent’’ in his business.

That business was transporting the majority of apples produced on Central Otago orchards to cool stores in Dunedin before the fruit went to Port of Otago for export.

At peak season he ran three to four trucks between February and July.

Earlier in the season his work involved transporting packaging to apple and pip fruit producers.

These industries run-down the NZer worker and praise the unknown overseas worker so they continue to tell that they are unenthused to have NZ workers. Further, many of these overseas workers pay no tax so keep in hand all they get. The RSE also get a guarantee of some much work being available to them over a period which the NZ worker doesn't and paid a dollar more per hour. They often have accomodation sorted and transport to the place of work whereas the NZ worker might be casual as required basis and no period of work guaranteed, employed today, not wanted the next and has to find accomodation and transport. Surely, as the fruit industry knows - need to compare apples with apples. Also, when looking for a more permanent job, saying one has been picking fruit does not help anyone compared with a customer interfacing job or handling cash or gaining a variety of skillsets that fruit-picking does not offer.

These seasonal industries are their own worst enemies. Who goes into business without a contingency plan? whether it be natural disasters or pandemics you should have a plan that you can adapt to the unforseen circumstances. Common sense tells you that if you lose your traditional labour force then you need to fall back on the alternatives. That may mean adjusting your thinking around how you attract them by providing some continuity of hours, a reasonable pay rate. NZers will have rent or mortgages to pay at home if they travel to your remote areas, they'll need accommodation, they'll need transport. Put your hand in your pocket and pay for it, even if you run this year at a loss you'll be doing better than shutting down. Time to drink a cup of concrete fellas, time to harden up, time to demonstrate that kiwi fighting spirit.