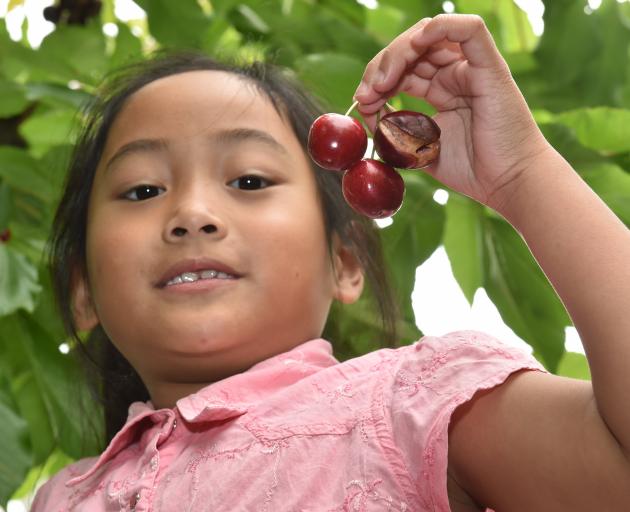 Alexa Elibare (7), of Oamaru, shows some of the rain-affected cherries at Darlings Orchard in the Teviot Valley on Monday last week. PHOTO: GREGOR RICHARDSON
Wet weather has been causing damage to early cherry crops in Central Otago, with some areas severely affected.

Fine weather, however, is on the way.

The first variety was ready to be picked when a 10-day period of rain in mid-December affected the crop.

In 20 years of growing cherries Mrs Jackson said neither she nor her husband, Gary, could remember having rain for that long on ripe cherries.

Although spring began with some heat in November, December had been cool.

"But really the hardest thing for us has been that rain that we’ve had that has just been unprecedented for us in Central in the quantity that we’ve had.

A high proportion of cherries ended up on the ground because they were unsalable, she said.

Most of their cherries were grown for export, including to Taiwan, China, the United States, Australia and Europe.

"Normally we would expect to have exported a great proportion of that first sonnet cherry variety."

The rest of the season was looking more positive with several more varieties due to be picked soon, but more rain could cause further damage, "so we just need to hope for the best".

Darlings Orchard owner Mark Darling, of Roxburgh, said the rain was an issue for all cherry growers, but the effects could differ, depending on local conditions.

Just physically having the water on the skins and having water on the ground could make the cherries swell and burst, he said.

His cherries were mostly for the local market and pick-your-own.

In Cromwell, Cheeki Cherries and Dam Good Fruit owner Martin Milne said he had not had problems with rain.

Mr Milne estimated about 200 tonnes would be picked at his orchard this year. About 80 tonnes of that would be exported for Chinese New Year.

The orchard had not used rain covers but had benefited from a hardier variety as opposed to the popular sonnet cherries which were prone to splitting.

Summerfruit New Zealand chairman Tim Jones said there was "no doubt" the start of the cherry season had been "pretty challenging".

"The early season has been challenging because of the bad weather we have had, but we are all positive and looking forward to some better weather in the new year, and some nice quality fruit."

Any fruit that could get to the market before the Chinese New Year on January 25 would be "pretty well received" in the Chinese market, he said.

Demand would start to increase over the two-week period leading up to the celebrations, Mr Jones said.

"We are cherry growers, we are always optimistic, so we are hopeful that the sun is going to come out, the rain will stop and we will have a good crack at it in January."