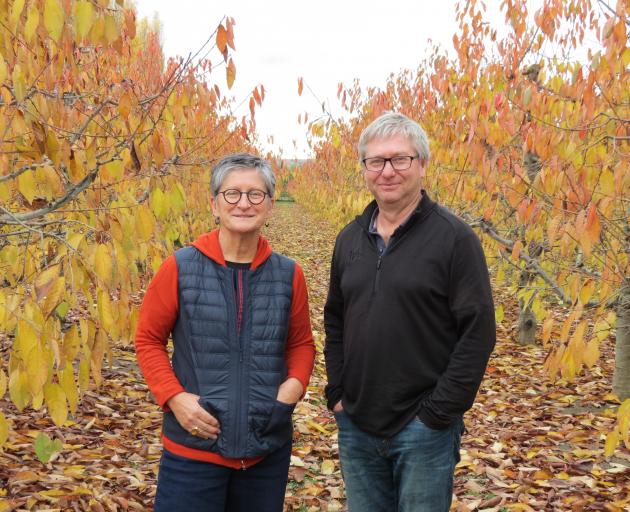 Summerfruit New Zealand chief executive Marie Dawkins and board chairman Tim Jones, who is also general manager of 45 South, Cromwell, were talking to growers and other industry stakeholders in Alexandra last week to discuss the proposed nearly $17 million Sensational Summerfruit: A bold plan for growth programme. Photo: Yvonne O'Hara
Summerfruit New Zealand (SNZ) is planning to spend nearly $17 million during the next seven years to grow the summerfruit industry.

SNZ board chairman Tim Jones, of Cromwell, said the strategy was designed to move the industry forward as well as make money.

Two consultation meetings with growers and other industry stakeholders were held in Alexandra and Napier last week to outline its Sensational Summerfruit:A bold plan for growth programme and ask for feedback.

Each meeting was attended by SNZ directors, growers, packhouse owners and other industry players, and outlined the benefits of the proposed strategy, as well as expected industry projections and challenges in the next few years.

''The key focus [of the meetings] was to engage with growers and get feedback from them to help fine-tune the document,'' Mr Jones said.

The proposed seven-year programme has five different spheres of work, which includes research into new markets and identifying consumer needs and wants.

It will develop better packaging and transport logistics, as well as utilising new purchasing channels, developing new varieties of fruit that target specific demographics and which have higher value health benefits.

They will develop higher performing orchards, introduce new technology including robotics, and even improve crop forecasting.

The strategy was designed to be responsive and flexible, allowing for changes or funding redirections to other projects within it, depending on research outcomes.

The strategy is expected to cost about $16.6 million, which includes $8million from industry, $2million of in kind support and $6.6million from the Primary Growth Partnership.

''There are no plans to increase the levy,'' he said.

SNZ chief executive Marie Dawkins later said the industry had huge potential and the programme was designed to enhance that potential.

''It is a really exciting project and will certainly be good for Central Otago growers,'' she said.

''This project will deliver to all companies, no matter what their size.

''The meetings were about doing the research and asking the questions.

''We don't expect everyone to support everything.

Mr Jones said the next step was to review the feedback from industry players.

''We may make slight modifications to the programme,'' he said.

Once any changes have been made, they would start negotiating with the Ministry of Primary Industries (MPI) for contracts. They will also employ more staff including a project manager.

MPI is to have a significant role overseeing the programme and there will be auditing and budgeting considerations.

''The earliest we can make a start is the next fruit season and certainly it will be within the next 12 months,'' he said.