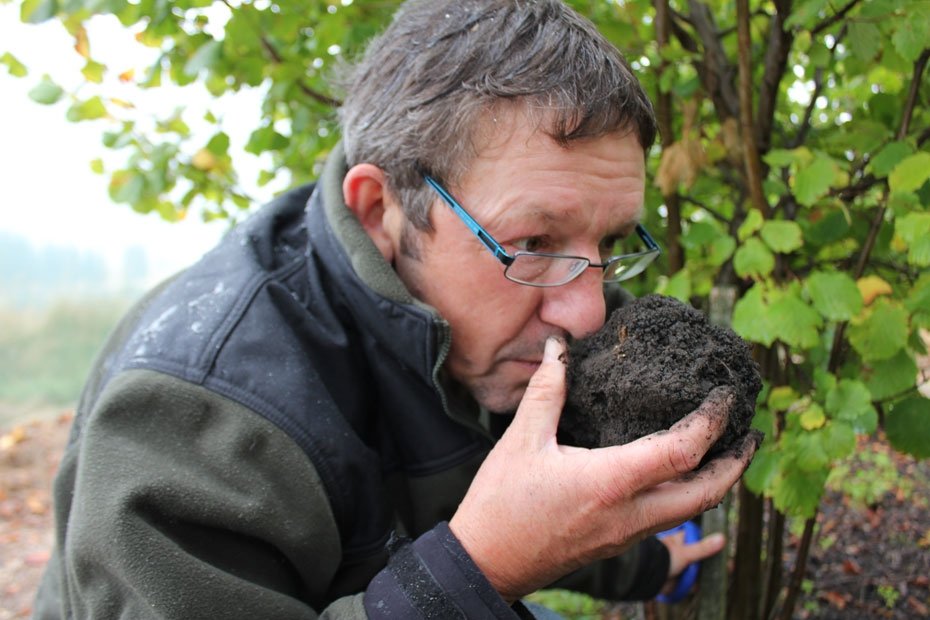 Limestone Hills owner Gareth Renowden, of Waipara Valley, smells a truffle in North Canterbury. PHOTO: PAUL THOMPSON
The harvest of Perigord black truffles has started and a "price war" continues as values remain a third of historical prices. Shawn McAvinue investigates the factors impacting the price of the "black gold" and the state of the industry.

A black truffle "price war" is raging in New Zealand.

The truffle species was the first type to be planted in New Zealand, had the most growers devoted to it and fetched the highest prices, he said.

The average market price for a premium Perigord truffle in New Zealand had been about $3 a gram for the past 20 years, he said. 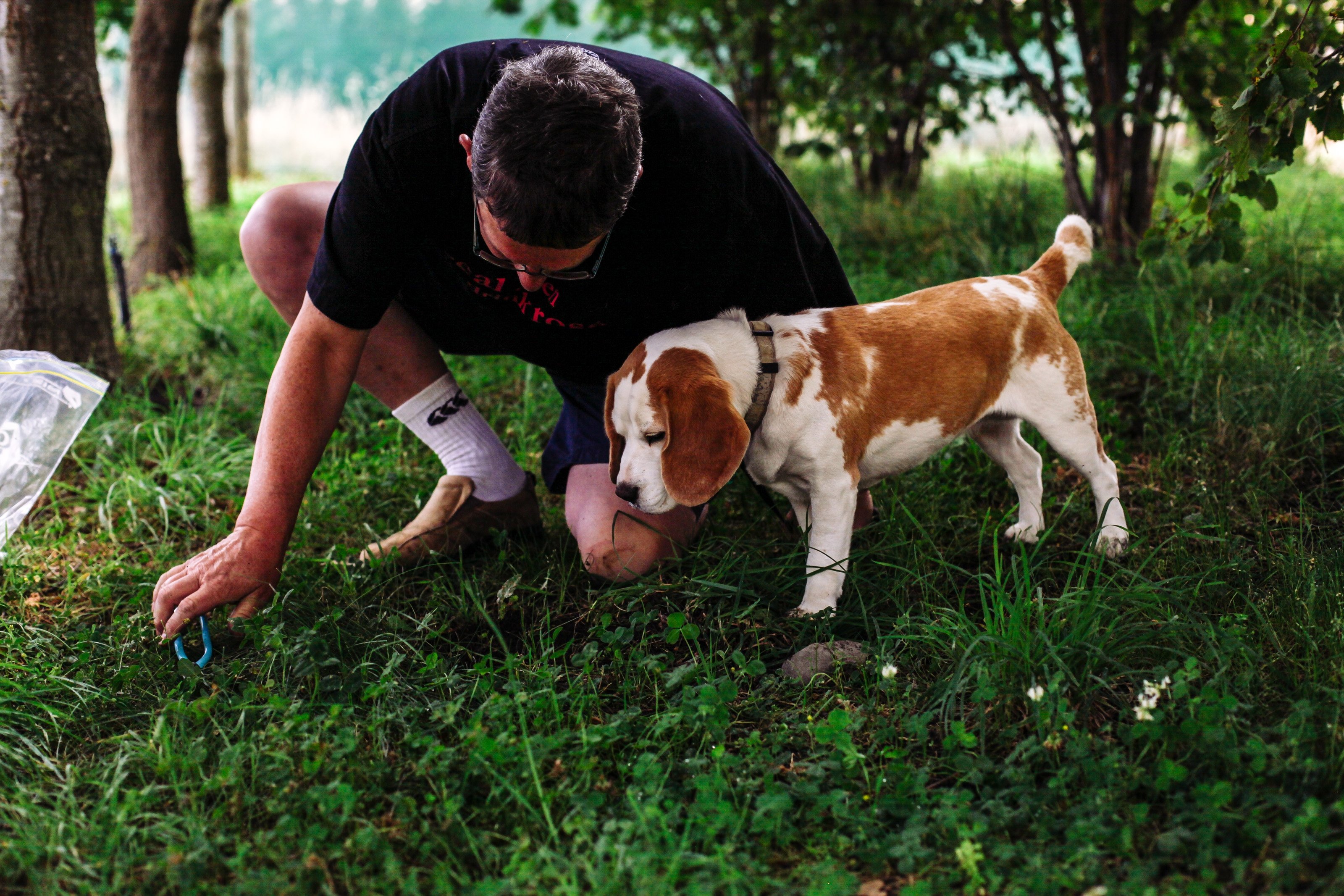 Limestone Hills owner Gareth Renowden, of Waipara Valley, and dog Rosie search for truffles in North Canterbury. PHOTO: NAY HAUS
In the past two years, more growers in New Zealand had been supplying Perigord truffles to the domestic market.

Demand for truffles dropped last year, after restaurants closed due to the financial impact of Covid-19.

A North Island truffle co-operative "triggered the price war" by working with Bidfresh — a division of food wholesaler Bidfood — by marketing truffles for $1 a gram.

Bidfresh used low prices as a "weapon", rather than creating a client base by building relationships, like truffle growers had over several years.

Many growers were "ropeable" by the price being "hammered" down.

"There was a lot of ill-feeling about how the market had been devastated by these very rash and ill-considered short-term plans."

A steady price was important, as growers created a business plan on a forecast financial return, so when the price dropped it had a serious impact on a truffiere operation, he said.

As Mr Wilkinson had "led the price war" he was in no position to advocate for the sector and to get growers co-operating to create export opportunities, or to make efforts to rebuild grower returns.

"Dumping truffle in the market is not a very nice thing to do to your colleagues."

The sharp fall in pricing was an "eye-opener" for growers.

"No-one expected the pricing in the market to collapse quite as dramatically." 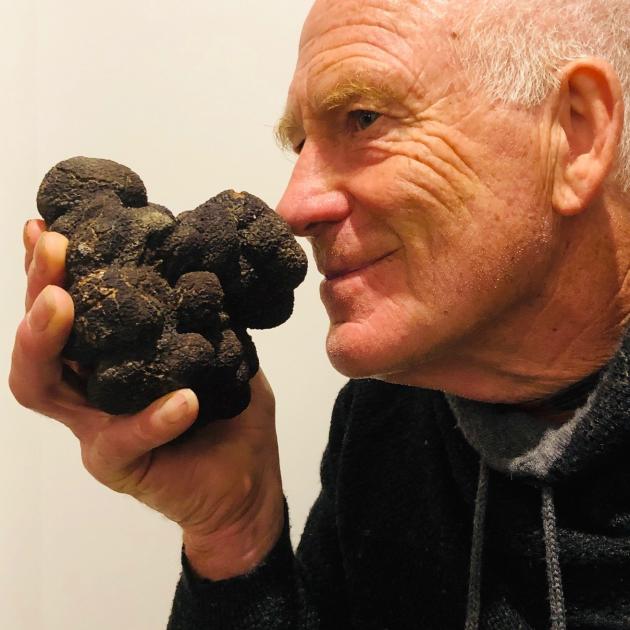 George’s Truffles owner and New Zealand Truffle Association acting president George Wilkinson sniffs a Perigord black truffle from his truffiere in Tasman.PHOTO: SUPPLIED
The drop had resulted in him losing "a few sales" but most of his clients stayed with him because he had built "close relationships" with them over the past 15 years.

Mr Wilkinson said he grew Perigord truffles among the 2200 trees of his commercial truffiere in Motueka.

He began selling in 2016 and was now selling a "high volume" of truffles — offering three grades exclusively to chefs in New Zealand.

The lowest grade sold for $1 a gram.

He sold truffles at prices he considered to be fair, rather than working to a "price point", like some other growers.

The aim was never to poach clients from other growers but to offer a product at a price and let the chefs decide on the best deal.

"It’s simple business. I don’t see it as a price war."

About 30% of Bidfresh truffle supply last season — about 15kg — was offered at $1 a gram to specific clients.

The remaining 70% of truffle was offered to the market at the normal price of $2.50 a gram.

Bidfresh was selling all its truffle at $2.50 a gram this season and the produce was "moving" at that price.

He expected an oversupply of truffle to be an ongoing issue as there were more than 250 truffieres in New Zealand producing up to 400kg of produce.

"The market is not going to be able to hold that value domestically."

Mr Wilkinson said the plan was to grow his business and "prove a point" by exporting his own truffles one day.

If he lacked enough supply to meet demand of international markets, he would invite other growers to join him in the venture.

Exporting was the "key" to deal with any oversupply on the domestic market, he said.

He wanted growers to stop acting "catty" and unite to pool produce for export, rather than being "dumb" by focusing solely on the domestic market.

"We’ve been working hard to try and get people working together but it’s inevitable some people feel aggrieved that someone else is competing against them. It’s quite odd. What are we to do? It’s illegal to have a cartel."

Mr Renowden doubted truffle prices would recover to the $3 a gram price but expected it to settle between $2 and $2.50 a gram if the sector began exporting.

Mr Renowden, an association member and former president, agreed exporting was a solution to the issue of oversupply on the domestic market.

Truffles had a 10-day shelf-life and would need to be airfreighted to international markets.

He agreed international markets would want much more than individual growers could supply, so the industry needed to "pool their crop" to meet the demand.

Canterbury truffle growers were "working together" to find ways to export but no-one wanted to invest until the international market stabilised.

The association had "a bit belatedly" employed a consultant to investigate the framework required to export truffles, he said.

He favoured exporting being led by growers.

Exports led by distributors forced growers to be "price takers rather than price makers".

Selling food cheap? That's disgusting, I dont know what the world is coming to....

isn't it completely illegal for competing businesses within an industry to coordinate prices between them? isn't this exactly what both Price Fixing and Cartel Behaviour laws are specifically designed to cover? Taxi companies got in big trouble for doing the same thing very recently.