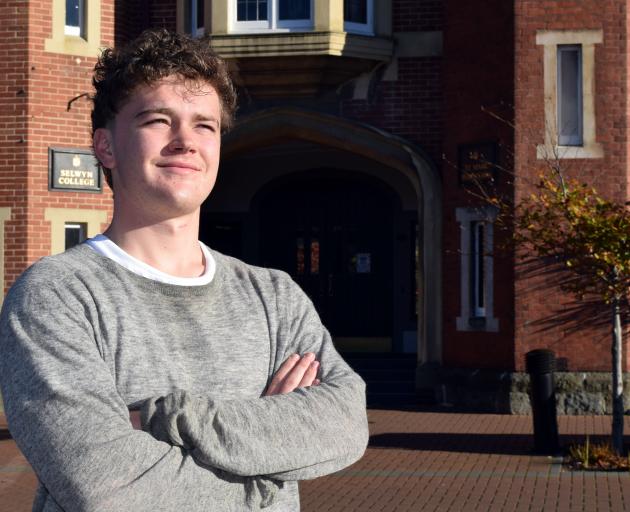 Meat Industry Association scholarship recipient Dominic Morrison. PHOTO: SHAWN MCAVINUE
Southern students considering careers in the red meat processing and exporting sector were among the Meat Industry Association scholarship recipients for 2021. In a series, reporter Shawn McAvinue asks them about their study and their future plans. This week, he speaks to Otago University student Dominic Morrison (18), of Queenstown.

University of Otago student Dominic Morrison is targeting a career in agribusiness — in between "jumping and twirling" in an all-male ballet troupe.

The first-year law and economics student used his $5000 Meat Industry Association scholarship to pay for his stay at residential hall Selwyn College on campus in Dunedin.

The price to stay in the hall includes the cost of a ballet uniform.

"The boys do ballet at Selwyn."

The Selwyn Ballet was launched in 1928 and was possibly the oldest men’s amateur ballet troupe in the world, he said.

The troupe trains twice a week to prepare for an eight-minute show of choreographed "jumping and twirling" in front of a packed house.

His other extracurricular interests include playing rugby — this season as a second five for Kaikorai Colts.

His parents owned houses in Dunedin and Queenstown.

Despite being born, raised and educated in Dunedin, he considers the resort to be home.

Mr Morrison’s interest in the rural sector was sparked by an agribusiness class he completed in years 12 and 13 at John McGlashan College in Dunedin.

"I got reasonably good grades."

He enjoyed the subject because its topics included innovation, business and science.

Interest in the sector also stemmed from his father working in rural banking for Rabobank.

His on-farm experience was limited but the skills he learnt as an assistant greenkeeper at The Hills Golf Course in Arrowtown over summer could be transferable, he joked.

"I know a bit about fertiliser and growing grass," he said.

As part of the scholarship, he met staff at the head office of Silver Fern Farms in Dunedin last week to discuss opportunities to get experience in the red meat sector.

The scholarship was a great chance to network and he felt "fortunate" to be a recipient.

"I’m excited to get to meet the other scholars and share ideas and to get some mentoring from some qualified and experienced people in the industry."