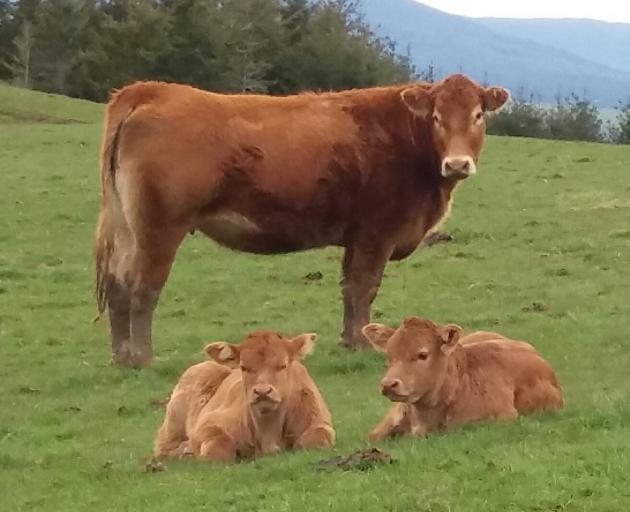 Limousins produce small calves with low birth weights, which mean they were useful to dairy farmers. PHOTO: SUPPLIED
It will be a variation on "surf and turf" for visitors to Colin Phillips’ Fern Hill Limousin Stud at Tuatapere this month.

He will host delegates attending the Limousin Beef Breeders’ Society New Zealand’s annual meeting and gathering in Invercargill from February 26 to 28, on a tour of his property on the Saturday.

They will also have a look at the Waiau Fisheries and Wildlife Habitat Enhancement Trust’s whitebait breeding ponds, which Mr Phillips helped create, at Te Wai Wai Lagoon.

His 500ha property runs only purebred Limousins, with 110 cows, in addition to 48 yearling bulls and 46 yearling heifers, and a similar number of 2-year-olds.

"It is quite impressive to see so many cows in one herd, and it is one of the biggest Limousin herds in the country," Mr Phillips said.

He liked the breed because of the quantity and quality of meat produced.

He expected a 600kg animal at liveweight to yield, on average, about 384kg on the hook.

There was some marbling and from 3mm to 8mm of fat on average.

Many of his clients were dairy farmers who put the Limousin bulls across Jerseys and Friesians.

Mr Phillips was a contractor to the trust and he and friend Mark Sutton, of Te Anau, facilitated the development of the 32ha of ponds several years ago and they have become a natural breeding site for whitebait.

"When we first started, we were just digging holes, then we learned a bit more and started making ponds."

The whitebait hatched and remained in the ponds until they were adults, then left to the open sea for a couple of years before returning to breed.

The trust planted flax and toi toi and the ponds had attracted trout, eels and ducks — and Mr Phillips had recently spotted a rare bittern.

The group counted and weighed samples of the inhabitants every three months, and there had been a marked increase in population during the past few years.