High-profile lawyer and businesswoman Mai Chen has been appointed to the board of southern meat processor Blue Sky Pastures. 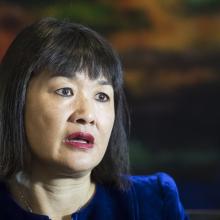 Mai Chen.
A note to shareholders from chairman Scott O’Donnell said the majority owners had reviewed the board make-up, given the Southern Lamb Investments takeover bid had closed.

In March, the company — associated with Mr O’Donnell and director Andrew Lowe — made a full takeover offer for all shares of the company.

When the offer closed earlier this month, valid acceptances were received for 74.87% of the shares.

Ms Chen has a long and prominent history as a senior law partner and board director. Until last month, she was the managing partner of Chen Palmer and an independent non-executive director on the Bank of New Zealand board for seven years.

Auckland-based, she specialised in advising on regulatory and government risk and was a constitutional and administrative law expert.

She also advised on Treaty of Waitangi and had appeared in the Supreme Court, Court of Appeal, High Court and District Courts and a range of tribunals and inquiries.

Invercargill-based Reece Oliver, a senior manager within the HWR Group of companies, now acting general manager transport, has also been appointed to the board.

He has held various senior financial roles within HWR Group and has a long history of investment banking for JP Morgan in London.

He led the takeover action for Southern Lamb Investments.

Mel Sutton, who joined the board in 2019, has stepped down.