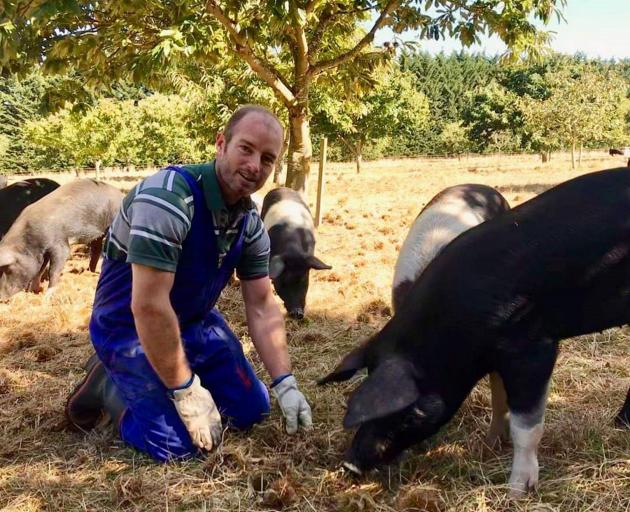 Josh Hill checks up on his pigs at his Poaka Free Range Pigs farm. PHOTO: SUPPLIED BY JOSH HILL
Heritage pigs have provided a nutty solution on a small farm near Christchurch.

When Josh Hill wanted to farm livestock he could turn into food, he found pigs were the ideal fit with the chestnut trees on his father’s 40ha property between West Melton and Darfield.

His father, Doug Hill, bought the property 30 years ago and decided to plant 10ha in chestnut trees, which were thought to be the next big thing in the 1990s.

"There was never enough farmers who got on board to create an enterprise, so he’s never done anything with them [the chestnuts]," Mr Hill said.

"I’ve always wanted to run my own farm and produce food and the chestnuts and pigs have turned out to be great option.

"The pigs forage around, eat grass and whatever else is around. Acorns and chestnuts have some good fats to make the back fat a bit more softer and it really comes out in terms of the flavour in fresh pork and the sausages."

But with background in sheep and beef, pigs were the last thing on his mind when he returned home in 2016, after managing a farm near Gore. 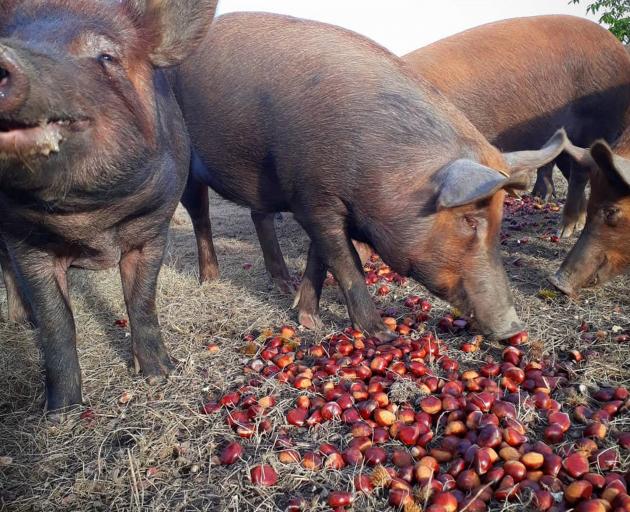 Pigs enjoy a diet of chestnuts and acorns at the Poaka Free Range Pigs farm. PHOTO: SUPPLIED BY JOSH HILL

"When I came back I initially planned to do something with sheep and cows, so it has been a fast learning curve."

After doing some research and talking to neighbouring farmers, Mr Hill decided to get some English heritage breed pigs, which grow slower than commercial breeds, but were bred for their "flavour and hardiness, so they’re ideal for a free-range system".

"The cold doesn’t bother them. They’re out their having a ball and carrying a reasonable amount of fat."

Poaka Free Range Pigs (poaka is Maori for pig) is a paddock to plate operation with a Ministry for Primary Industries approved craft butchery, supplying sausages, salami, pork, ham and bacon to the Christchurch Farmers’ Market, wineries, restaurants, supermarkets and via an online store for the past two years.

Mr Hill has 35 breeding sows of the Tamworth, Berkshire and Wessex Saddleback pig breeds and has up to 400 pigs on the farm.

When he first started, he did everything himself except for the killing, which is done at a local abattoir, and his father helps with feeding out.

"I’m not a butcher, but I grew up on this farm and I was always going hunting so I know how to handle a knife. I did all the butchery and made the sausages and salami.

"But as the business has grown, I’ve taken on two staff including a butcher."

Despite his success, Mr Hill plans to keep his business small-scale and wonders if this may be the way farming needs to go in the future, given environmental constraints.

"If everyone farmed like this, most people wouldn’t be able to eat meat seven nights a week because it would be too expensive, but I guess that’s the way it’s going to have to head.

"There’s more and more small operations like this popping up and it’s probably an area that’s going to grow and there’s lots of lifestyle blocks out there which are under-utilised."