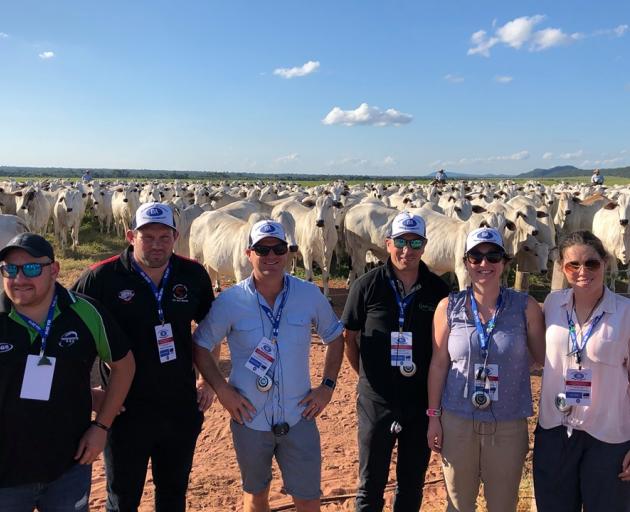 Having just spent six days in Brazil at the International Beef Alliance (IBA) the 24-year-old Southlander is back working as a stock manager at Coalbrook Farm, a 500ha sheep and beef operation just outside Gore.

And while she loves her job, she reckons the trip to Brazil will be a tough one to beat, describing it as ''hands down the best thing I've ever done in my professional life.''

That's saying a lot. Ms Cairns started with Coalbrook as a shepherd a little over a year ago, on the strength of a bachelor of agricultural science with first class honours.

They joined other future leaders from Australia, Canada and the United States, as well as delegates from Brazil, Mexico and Paraguay, in Mato Grosso state, Brazil's main beef producing region.

In beef terms, the IBA is a super power, representing almost half of the globe's beef cattle production and almost two thirds of global beef exporting nations.

''The trip was truly an eye-opener,'' Ms Cairns said.

''We were rubbing shoulders not only with our international peers but with industry leaders and decision-makers, people who dealt with the Trumps of the world on a regular basis.''

Ms Cairns said the IBA was very aware of the looming challenges, including shifting consumer demand, the global impact of the African swine fever outbreak in Asia , the advent of alternative proteins and how those factors are likely to affect the global market.

Nulore in-calf heifers. Nulore are a common breed found in the Brazilian state of Mato Grosso, popular due to their ability to handle the hot summer temperatures. Photo: Supplied

She said the group also learned a lot from ranch visits.

''A number of producers use what they call semi-feed lots. Stock have ad lib access to pasture and are topped up with about 2kg of mixed rations a day. These semi-feed lots are crucial to these producers due to the extremes in climate they face.

''Compared to New Zealand farming practices there was certainly some inefficiency and waste, which to some extent reflects the sheer scale of farms there,'' she said.

''With 200million head of cattle in Brazil, it's impossible for New Zealand to compete.

''So it really reinforces the need to continue to find alternative, better ways of production and marketing, making sure we continue to tap into the top end of the international market with high quality, reliably and ethically sourced product.''

The beef summit coincided with the launch of B+LNZ's new Taste Pure Nature campaign, being piloted in the select markets of the United States, Germany, China, India, Indonesia and New Zealand following two years of internal research and marketplace testing.

Working with export and marketing companies First Light, Atkins Ranch and The Lamb Company, the campaign has hit the ground running in its California pilot, with a vitual blitz of media and digital advertising bringing the story of New Zealand's naturally raised, grass-fed beef and lamb to the attention of tens of thousands of North American consumers.

''We're taking a long-term view of building the profile of Taste Pure Nature brand and understanding of New Zealand's farming systems in California and the US, to hit the ground running highlights just how receptive our target market is for New Zealand beef and lamb,'' B+LNZ general manager market development Nick Beeby said.

''I'd like to continue to work with B+LNZ to spread the positive story New Zealand farmers have to share. A large amount of our population aren't lucky enough to come from a rural background and I want to educate those people about how amazing our industry truly is and the opportunities within.''

Ms Cairns grew up on a 2000ha sheep and beef farm in the Catlins and her preference is to stay and farm in Southland.