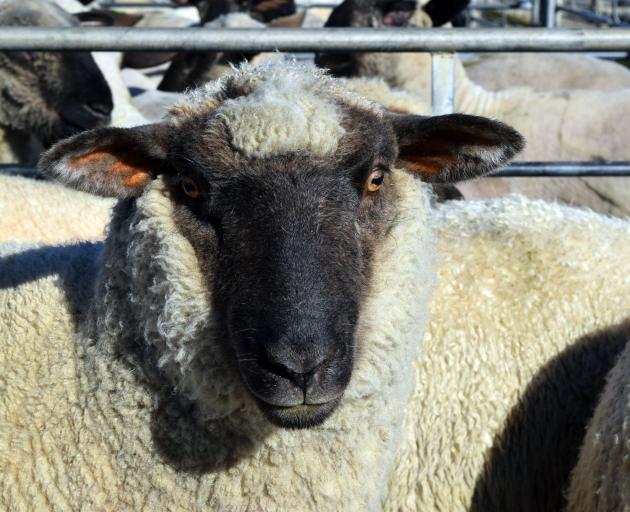 A prime lamb on sale at Balclutha Saleyards last week.
A spring storm which hit the South during lambing was ‘‘grim’’ but farmers were prepared and have battled worse conditions, the head of Federated Farmers Otago says.

The strongest wind gust Niwa measured was more than 120kmh in Middlemarch on September 13.

The coldest temperature of -1.4degC of the two days in the South was at Swampy Summit, north of Dunedin, on September 9.

Federated Farmers Otago president Mark Patterson, of Lawrence, said lambing was in ‘‘full swing’’ in Otago and the storm was ‘‘grim’’.

He had started lambing on September 8 and had lost a few lambs in the storm.

‘‘On a good day, lambing is the best job in the world. On a terrible day, it can be stressful.’’

Feed being ‘‘really tight’’ as a result of a dry autumn was a challenge.

The weather in winter had been ‘‘reasonably kind, if a bit wet’’ and the weather during the first fortnight of spring was ‘‘not ideal’’.

Farmers had come to expect the weather pattern at the start of spring, so they were prepared.

‘‘At this time of year you get blustery, changeable conditions, so I don’t think lamb losses would have been high — we’ve had a lot worse.’’

For example, the recent storm would be considered ‘‘less than ideal’’ if compared to a blizzard in spring 2010, which had lasted for more than a

The warmer weather forecast for the second half of the month would bring some ‘‘respite’’ and get grass growing.

‘‘It was very challenging conditions.’’

The storm was cold and wet and featured lightning and thunder and finished with snow.

‘‘It was fairly rough and there’s not much you can do when conditions are like that.’’

He urged anyone having a tough time to talk about it.

‘‘Have a chat to someone over the fence or on the phone.’’

‘‘The weather has been revolting.’’

Farmers in Northern and Western Southland had told her it was the wettest winter they could recall.

The calls to the trust had not been because of the weather, she said.

‘‘We are always here if you want to ring and have a chat.’’

Otago Rural Support Trust chairman Mike Lord, of Berwick, said it seemed the impact of the spring storm was less than some past springs when heavy snow hit.

‘‘I haven’t heard anything to suggest the losses will be huge but our phone is always there and if people want to call us, they can.’’