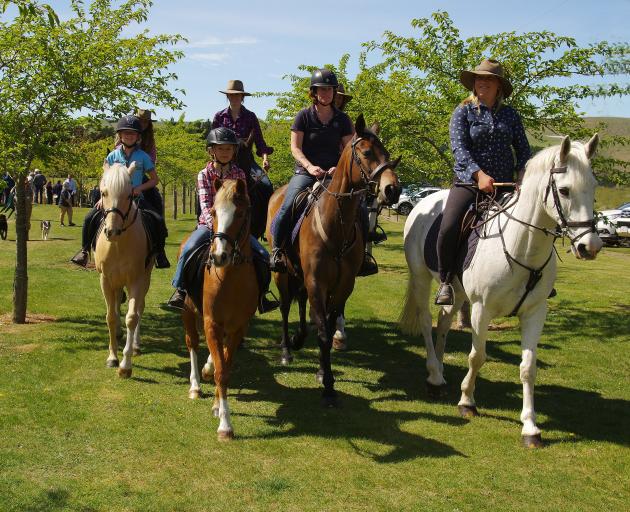 Organised by Fiona, Lady Elworthy and former land girl Alexandra’s Sadie Lietze (nee Stuart), the event commemorated the efforts of the nearly 4000 women who worked the land during World War 2.

Lady Elworthy said about 150 people from 16 families gathered at the Rongomaraeroa Peace Walk at Maungati.

Attendees listen in the sunshine as pianist Adrian Mann plays a tune on his red piano.

A highlight was a team of eight horses and ponies forming a guard of honour, organised by Sara Rowley, Lady Elworthy said.

"It was so beautiful and we had a blue-sky day."

A memorial bronze plaque and seat was blessed, and attendees were able to share memories of their "heroic" women.

Music played a big role on the day, as pianist Adrian Mann performed and Jan Prestidge provided music during the blessing ceremony.

At the Maungati church hall, Jill Griffin-Roberts and Lorina Harding sang old war songs, including The White Cliffs of Dover.

"The sound of their voices was just so beautiful."

They, along with the riders, were dressed in 1940s country clothing, which "really added to the day", Lady Elworthy said.