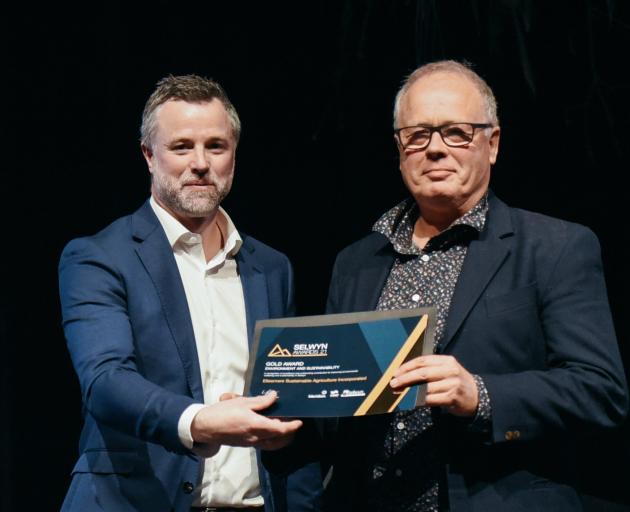 A volunteer, farmer-led organisation, ESAI has grown from a small gathering of environmentally aware and innovative farmers to be nationally recognised as a major player in environmental sustainability within the New Zealand agricultural sector.

‘‘This award is a wonderful recognition by our wider community for all the hard work our volunteers and their predecessors have put in over the past 20 years,’’ chairman Tim Chamberlain said.

Mr Chamberlain received the gold award from Selwyn Mayor Sam Broughton at a gala dinner in Lincoln, which was attended by 450 representatives from businesses and community groups.

He said the award would help to create awareness in the wider community about the positive initiatives by Ellesmere farmers and help close the urban-rural divide.

‘‘The award is timely as our flagship Project Tinaku is in full swing with nearly 50 regeneration initiatives around the district either completed or in the planning phase,’’ Mr Chamberlain said.

With funding from the Ministry of Primary Industries through the Government’s Jobs for Nature programme, Project Tinaku had supercharged ESAI’s efforts to address environmental issues like water quality, riparian management and environmentally sustainable farming practices.

Mr Chamberlain said his team was due to update its 110 farmer members on Project Tinaku during the group’s recent annual meeting in Leeston.

‘‘The AGM was a great event to look back at the major leap forward we have made, as well as celebrating our Selwyn award and to let our members know about the exciting projects we are working on.’’

Almost 40 people attended the AGM at the Lakeside Soldiers Memorial Hall to hear about Project Tinaku and the group’s involvement with submissions to district planning and input into proposed new freshwater regulations and related compliance legislation.

‘‘The planting and regeneration projects are the most visible part of our work, but ESAI was initially formed to help Ellesmere farmers deal with the complexities of increasing compliance and we are recognised at a local, regional and national level as a well-informed and innovative farming collective,” Mr Chamberlain said.