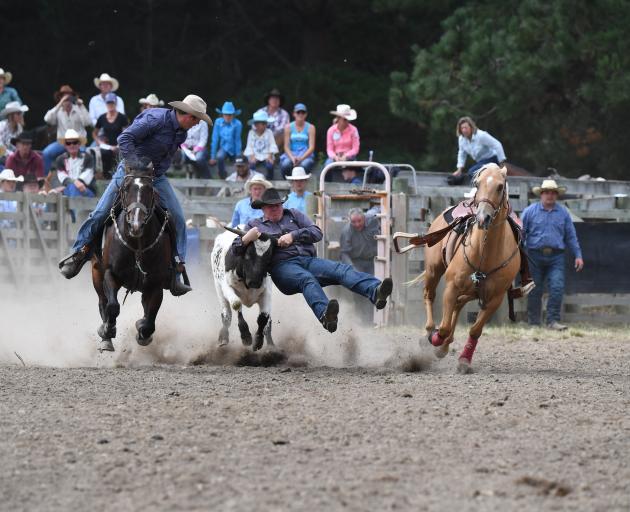 A cowboy brings down a calf during the Waikouaiti Rodeo in 2017. The rodeo is among several planned in the South and nationwide this summer that have been cancelled by organisers due to Covid-19 crowd restrictions. PHOTO: STEPHEN JAQUIERY
The southern rodeo season hangs in the balance as organisers weigh up whether they can operate under new Covid-19 crowd restrictions following a string of cancellations.

Already, several have cancelled their upcoming events. Other rodeo organisers spoken to by the Otago Daily Times yesterday said they were yet to make a decision, and could still cancel, or run their event in an altered form.

Of the 27 national rodeo events listed on the Rodeo New Zealand website yesterday, 11 were confirmed as postponed or cancelled.

Among them were southern rodeos at Millers Flat, Mataura, Henley (Mad Bull), Te Anau and Omarama.

Omarama Rodeo president Daniel Montgomery said the club had decided to cancel its event to reduce the risk of financial losses for itself and sponsors.

"We have to start booking all the elements that come together to make a rodeo around the beginning of November.

"Back then, there was no certainty around what the crowd regulations might be, and I’m not sure that’s really improved now.

"It’s pretty disappointing, but we weren’t prepared to take the risk of putting money forward that might later be lost due to a forced cancellation."

"We didn’t know how we’d be expected to police vaccine passes, or what traffic light we’d be on. There was just too much uncertainty to be fair.

"Would we need security to police the gates? What other additional costs might there be? It’s all a bit up in the air right now."

He said the club was in a strong financial position, and could "weather" a year off.

"It’s as much a disappointment for the town, local people and businesses. We usually see a crowd of 2000, so that’s another hit for local business."

Other clubs were yet to make a final decision on whether to run, although some remained determined to hold an event in some form.

"We’re wanting to run, but there’s also a decision from the national board to come this weekend, whether this season will be non-points.

"If that’s the case, we might still decide to run with limited events. We had a massive working bee today, and no reason we can’t still run sideshows and so on for the families to enjoy.

"Unfortunately, it’s not as simple as go or don’t go.

"Some costs, such as bringing in specialist rodeo bulls, are shared between several events within a district. So if you only have one of those events left running this year, that needs to be factored in to the books."

He said he expected most clubs to have made a final decision by Monday.

"We’ll decide on Saturday whether to run a points or non-points season, and that may influence those decisions.

"It’s definitely not an ideal situation. But we’re not living in normal times."