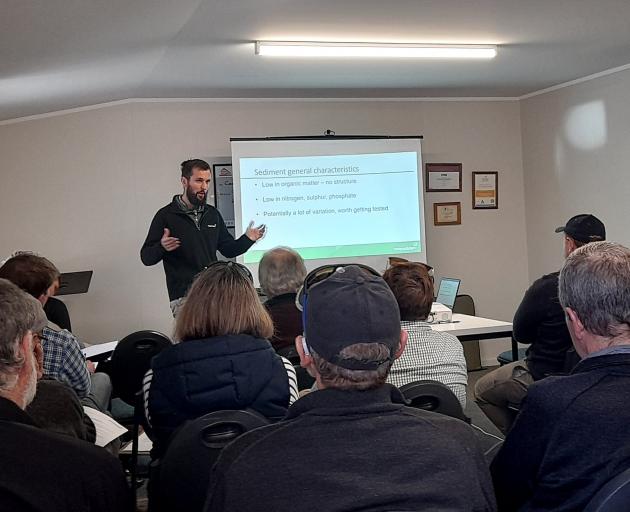 Ravensdown scientific officer Will Talbot speaks to landowners in Mid Canterbury about managing sediments and getting land back to its fertile and productive status. PHOTO: TONI WILLIAMS
Groundworks, weed growth and low fertile soils on lands left by flooding saw Mid Canterbury landowners turn out in force last week to hear about flood recovery needs at a workshop organised by Mid Canterbury Rural Support Trust and DairyNZ.

The event, held in the Winchmore Hall, saw specialist speakers talk about agronomy (soils, fertility of the new soil and its challenges) as well as earthworks under way (shingle, silt, clearing land). There were also farmers from Rangitata to speak of their past experience dealing with floods in 2019.

About 50 people were registered.

Rob Wilson, of Rangitata Island Dairies, was among the farmers to speak of his experience in the Rangitata flood.

Protection works in the riverbed were only now being done due to complexities with the number of people involved, covid delays and funding, he said.

Rangitata Island Dairies was left with scoured and silt-covered land in the Rangitata flood, which was described as a one-in-20 year event.

But the scale of the damage threw everybody because the river acted unexpectedly and there was national infrastructure to repair, including the state highway road and railway line.

“We bought the land, we knew the risk,” Mr Wilson said.

He said after the event it was farm management 101; how to keep the cows fed and watered and milking.

There were deep canyons, rocks and silts left behind across the land.

The irrigation was insured, but the fencing and contouring was not.

“It’s actually just managing what you’ve got,” he said.

They broke the repairs up into smaller blocks and kept an constant eye on the budget.

“It takes a bit of time. You’ve got to micro-manage all the time.”

The irrigation was dealt with first, then lime tracks rebuilt for cows to walk on.

There was a strategy, they had a plan, and they stuck to it, he said.

It included getting professionals in where needed to prevent making a bad situation worse, at more cost.

There were trial and errors.

But the advice to those going through it now in Mid Canterbury was to do it properly the first time — even if it might cost more up front — because it helped get the land and pastures back to peak condition faster.

Ravensdown scientific officer Will Talbot spoke about managing sediments and getting land, now covered in silt sediment, back to its fertile and productive status.

The general characteristics of sediment meant it was a low organic material with no structure and it was important to mix it with high organic soils. Testing soil was highly recommended.

The silt carried risk of weeds which had potential to remain dormant for many years before germinating. There was also smelly sediment.

The depth of the sediment deposits would dictate the work required, he said.