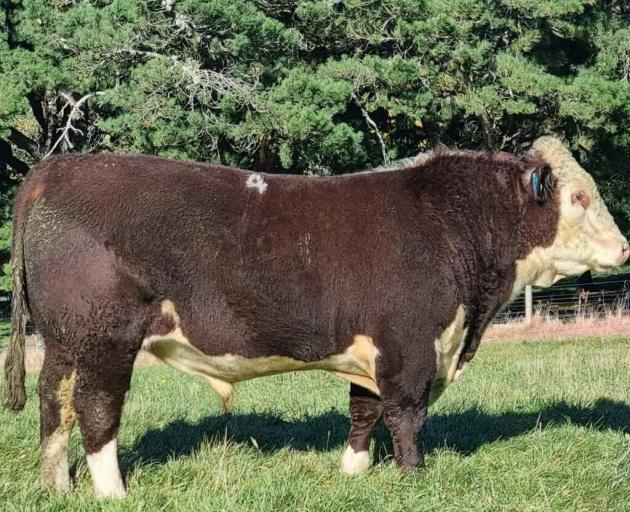 The Mt Somers stud was second cab off the rank with its afternoon sale following the morning start at Orari Gorge Station in Geraldine on June 8.

Okawa Saracen 0175 was sold to the Davies family at Charwell Herefords from Bay of Plenty, while the second-highest price, $35,000, was for Okawa Kingpin 0156 which went to Maungahina Stud near Masterton.

Owners Nick and Penny France were as pleased with the depth of commercial bulls in the catalogue as the top end of the sale — which was not far away from their sale best of $60,000 in 2019.

Mr France said the young bull’s exceptional width and depth was backed up by good figures.

The product of their embryo transplant programme provided good buying, he said.

"It was a perfectly structured sale for the commercial guys too and there was plenty of bulls for everyone.

"We only ended up passing in three bulls and there were plenty of $4000 to $5000 bulls for the commercial sale."

Some of these bulls went to cover Angus cows for hybrid vigour, he said.

Within the catalogue were 22 sons from Matariki Kingpin which they bought in 2019 as the second-highest-priced bull for the season.

Another key contributor was their keeper bull, Okawa Saracen 7036.

He said buyers were doing their homework when they went looking for quality bulls.

"They are being pretty shrewd with what they are buying. They are better educated and are spending a lot of time to get better quality for their money.

"They’re not just looking at figures — that’s the easy part; they look for a type and demand structure and width."

The couple have already reinvested some of their earnings into genetics after buying Limehills Stardom from Central Otago’s Limehills stud.

Mr France said they liked the look of the Hereford bull because of his data set and as he had top full brothers and came from an exceptional cow.

The new addition would tie in nicely with their breeding programme, he said.

"We are increasing our intra-muscular fat for the grass-fed market, but keeping the structure and constitution of the Herefords."