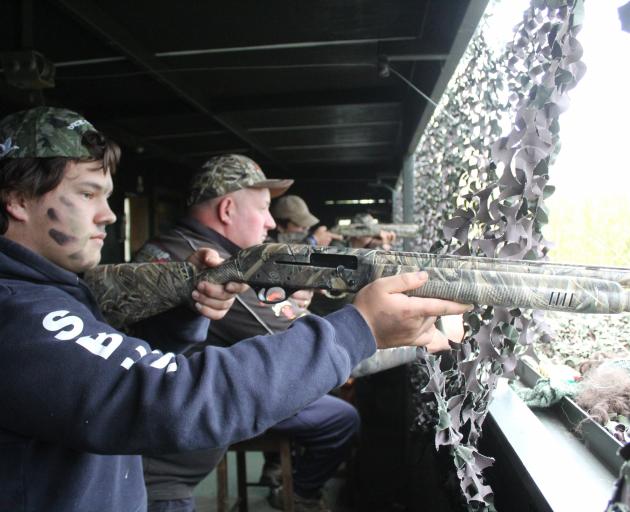 Southlander Keflar (17) bonds with his father Glen Morrison at their mai mai near Wallacetown on Saturday. PHOTO: VALU MAKA
For Southland’s Glen Morrison duck-shooting has always been a family affair.

It was a tradition which began for him at the age of 5 with his father.

"It’s a sport that I’ve grown up in and it’s the Southland way — even though I don’t remember it at 5 years old, I know it was a great bonding experience with my dad."

With more than 40 years of experience, he hoped to pass on the same traditions to his sons, Keflar (17) and Hunter (14).

The biggest changes he noticed over the years were the new rules and regulations and a lot more women involved with duck-shooting, he said.

Over the weekend, Mr Morrison and his sons spent time out on their mai mai, which was backed on to a pond out on their private property near Wallacetown.

They started on Saturday at 7am and before lunchtime had shot 45 ducks.

Having a mai mai and pond on their private property meant his sons had a safe place to shoot ducks, he said.

"On our family farm growing up we always had a duck pond, so it was safer than going and shooting somewhere else, especially when you are a young hunter."

His son Keflar said he started duck shooting at 5 and over the course of the years learnt the importance of firearm safety from his father.

"I’ve learnt gun safety from my dad. It’s more about common sense and it’s about being considerate of the people beside you."

What he enjoyed the most about the season was spending time with his father.