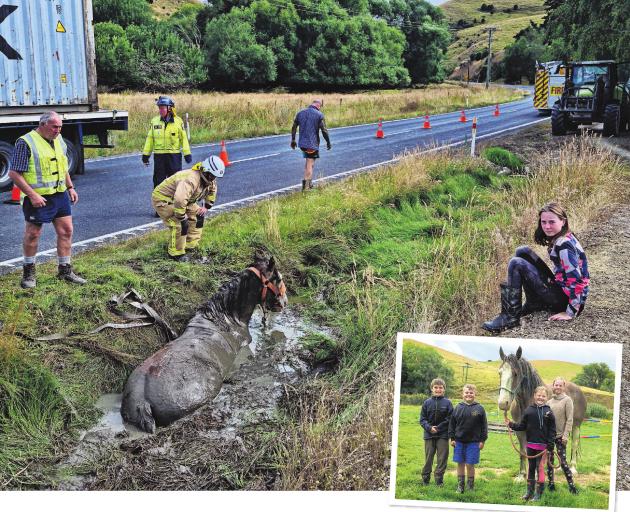 Clydesdale Danny flounders in a muddy ditch while Chloe Miller (12) looks on as the rescue takes place. Right: Alec Miller (10), Jack Young (10), Jade Miller (8) and Chloe are happy to have the family horse, who got a thorough clean afterwards, back. PHOTOS: ESTHER MITCHELL & NICK BROOK
They searched high. They searched low. But in the end Danny was stuck in the mud, just down the road.

The 5-year-old Clydesdale horse, named Danny, had to be rescued from the muddy ditch at the side of the road between Lawrence and Beaumont.

The not so insignificant mission to free the horse brought traffic to a standstill on State Highway 8 about 10am yesterday.

They rounded up the kids and started searching.

But he could not be found — here, there or anywhere — until his long nose poked up and he was spotted, after about four hours of horse hunting, just 300m down the road.

"He somehow got the gate open. Fortunately none of the other horses went with him. We must have driven past him a few times before we noticed him stuck down in the ditch," Mr Moore said.

"He wasn’t moving — his head was only about this far [70cm] from the tarmac and he might have been in there all night so I suppose he was pretty used to the traffic by then."

Ms Mitchell called 111 and a police car and fire engine arrived to control traffic while Mr Moore manoeuvred his tractor on the main road to manage the extraction.

Danny was lifted free from the mire using strops and the tractor forks. He was then washed off and checked by a veterinarian who was satisfied the big, bedraggled dray horse was in good health.