You could be forgiven for thinking you were going dotty.

Sue Rissman certainly did when one of her ewes delivered five spotted black and white lambs on Sunday.

The quintuplets, four girls and a boy, seemed perfectly unaware of the interest in them yesterday as they trotted around after their mum on the 21ha lifestyle block Mrs Rissman and her husband, Grant, own inland from Palmerston.

The pair have 47 ewes, which have overwhelmingly delivered twins and triplets.

But a haul of five lambs was a first. 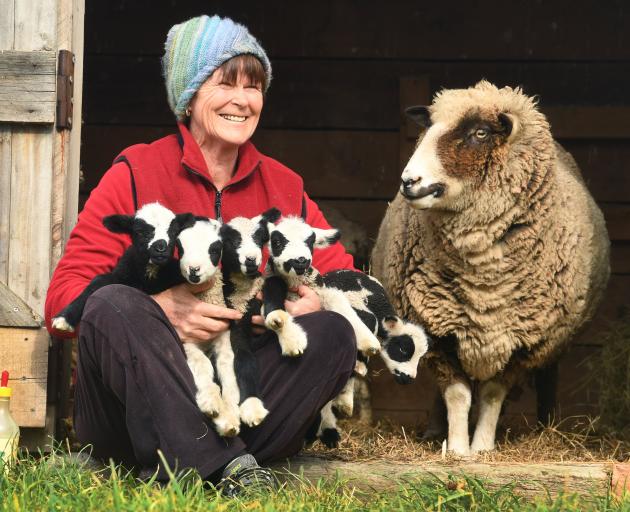 Sue Rissman was amazed when one of her ewes delivered quintuplet lambs on Sunday. PHOTO: STEPHEN JAQUIERY

The ewe in question, nicknamed "No Nuts" because she would not eat sheep nuts, had previously given birth to twins and quadruplets.

"I thought she’d had four again, and I looked and thought ‘she’s getting rid of the afterbirth’ but it wasn’t. It was another lamb.

"It was actually the biggest one that came last."

The distinctive dots were the result of breeding from five spotted ewes she bought in the late 1980s.

"It was a novelty. I was fascinated by it so it started the journey, really."

Mrs Rissman has been helping the mother ewe and bottle feeding her five hungry dotty lambs.

"Everyone needs to have a good news story every now and again."

Oamaru Vet Centre vet Gwyneth Mark said while it depended on the breed of sheep, quintuplets were "pretty rare".