Family working out how to keep tracks open 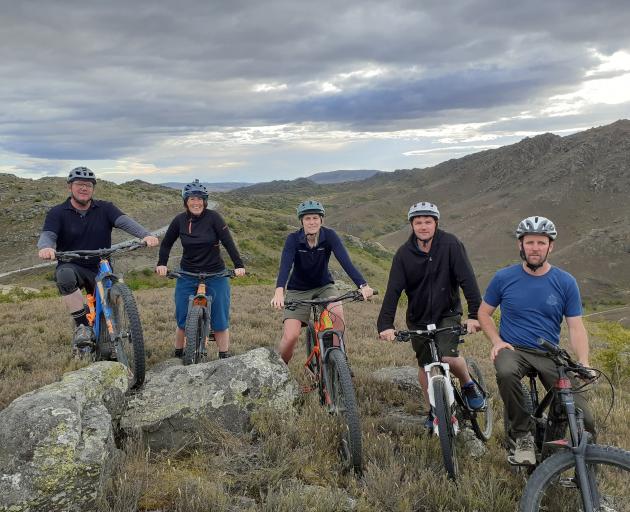 Preparing for the opening of a commercial mountain bike park at Matangi Station over the summer are (from left) Brett, Helen, Amanda, Tony and Mark Sanders. PHOTO: SUPPLIED
Merinos and mountain bikes.

Changes are afoot at Matangi Station, near Alexandra, where the Sanders family is seeking to open a commercial mountain bike park over the summer.

As lambing ends and recreational access to the Little Valley property reopens, the family has been grappling with how to keep the tracks behind the town’s famed clock open to the public for years to come.

“We feel we have always had a positive relationship with the community around them utilising our family land, especially during recent times," Brett Sanders said.

"Covid really highlighted the need for people to get out in the fresh air and look after their own mental health."

However, they were challenged by its popularity and the impact on their farming operation from the growing numbers of recreational users.

"Many of our local community understand that it’s a privilege not a right to be there. A number of recreational users, especially from outside Alexandra, treat it as public land and have no understanding of the unwritten agreement between us as landowners and them as recreational users. So if public access is to work for us and be enduring, it needs to be formalised."

The Sanders family has only ever made tracks on its land for the purpose of land and rabbit management, but over the three decades or more that bikers and other recreational users have been using their land, more informal tracks have been made by those users.

"But we have been trying to find the sweet spot where this private farmland remains commercially viable and we can still allow access for the health and wellbeing of our community. The reality is, though, that if we can’t find that sweet spot, one option is to close that access off," Helen Sanders said, adding there were potential legal and health and safety issues from the increasing number of people on Matangi without formal permission.

That was the "last thing they wanted to do" as a core part of their farming ethos was social responsibility, both to the environment and to the community their farm bordered, Mrs Sanders said.

John Charles Sanders bought 11,500ha of pastoral land called Matangi in 1923 and it has been in the family ever since.

Their land straddles the Otago Central Rail Trail and runs down to the Manuherikia River. The front faces of the hills nearest Alexandra have been put into the QEII National Trust by John Sanders to preserve the backdrop of Alexandra.

Alec Sanders gave Alexandra the area of land which is home to the hillside clock. He also gave away the land around the lower Manorburn Dam which makes up the recreational reserve.

The Sanders family has been considering its options for more than three years, investigating many different avenues with a community team of like-minded people who want to see the access issue resolved while trying to bring benefits to the wider Alexandra community.

The Sanders family has been working on a proposal which will allow it to open a mountain bike park to better manage public access.

It heralded a new era on the property and, alongside it, there would be a defined area set aside formally for public use.

"We love the fact that mountain bikers are wearing merino wool that is ethical and sustainable. It will be a great result if they can ride in this amazing environment where the fibre is grown, they can see it with their own eyes — the real life of our four-legged friends," Mrs Sanders said.