The end of the fishing season is not far away but it does not seem long since it started, so we need to make the most of it.

Conditions have been great for fishing recently and it seems like not much will change in the short term.

My last two outings were scorchers, bright sun and little wind which, combined with clear water, were great days.

Reading traditional fly-fishing books, they mostly state that these are the worst conditions for fishing - but in my experience, the contrary is true.

Some of my best days ever have been on hot sunny days.

I am not saying that they were easy, but certainly satisfying, even if the numbers caught were not great.

There are lots of fish rising at the moment on the waters I have been on, mainly close to willows, which would suggest they are feeding on willow grubs.

In the evening there should be hatches of sedge, especially when it is warm and muggy, and an hour or two on the water should produce fish.

Just as the morning warms a little or as it cools off in the evening are ideal times for a fall of spinners.

If you like fishing still waters, a water boatman fished in the shallows early in the morning can be productive.

The fish give themselves away as they dash after their prey, causing a bow wave or sometimes breaking the surface.

Start fishing well back from the shore so as not to scare any fish that are there.

I fished the Pomahaka at the weekend on a perfect day as mentioned above.

I caught a fish second cast, which can sometimes be a bad omen but it was not, at least not initially, as a second soon came to the net.

Both these fish were caught in slack water under the shade of willows.

Out in the open sun was a different story.

The sun was behind me and the flash of the leader in the air had fish departing at a high rate of knots.

I came to one fish that was right in against my bank which gave me a better angle and it readily took the fly.

It exploded into action as I set the hook, jumping and running.

When it came to the net, I was delighted to see it was a sea trout.

It had been in freshwater for a while, as it was dark on the back and had orange mottling on the lower flanks.

It weighed in at just under 2kg.

As the sun got higher and moved round in front of me, the fish were a bit easier to approach and were easier to spot.

I caught several on the unweighted size 14 hares ear nymph.

I was looking forward to getting back to the car and having a cup of tea before driving home but I kept spotting fish and that slowed me down.

I eventually made it, and the tea tasted even better than I anticipated. 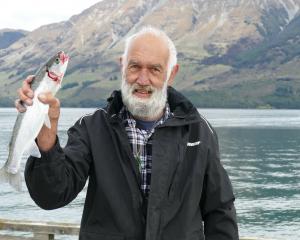 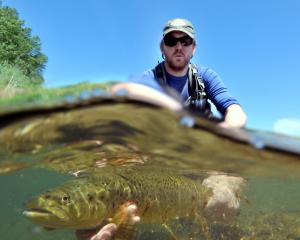