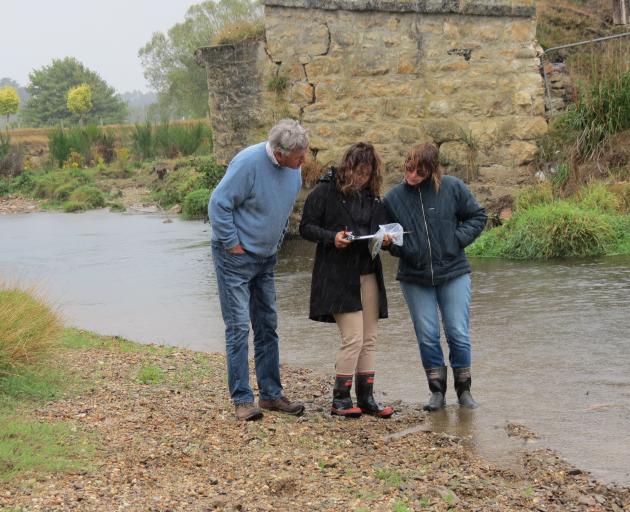 Keen to learn about stream health during a BLNZ freshwater monitoring field day at Waitahuna on Wednesday are (from left) Peter Shepherd, of Waitahuna, Ray Mohan, farm environmental adviser for Ravensdown, Dunedin, and Ruth McRae, of Waitahuna. Photo: Yvonne O'Hara
About a dozen people braved the cold and rain to stand in a creek to look its health, at Waitahuna last Wednesday.

Between 15 and 20 attended the first two.

''There is quite a high level of interest,'' she said.

Niwa scientist and freshwater ecologist Dr Amanda Valois talked about the Stream Health Monitoring and Assessment Kit (SHMAK), which provided simple tools for farmers, catchment groups, schools and others interested in freshwater values, so they could assess the health of their streams.

She said workshop participants learned simple techniques to measure up to 13 indicators of stream health.

The Waikaka group was split into four and each looked at the same stream and each group gave it similar scores.

''It was quite an eye-opener for them,'' Dr Amanda Valois said.

She said it was important to monitor streams to evaluate whether measures they were taking for their streams worked. Information was valuable in detecting any problems early, for developing Farm Environment Plans, providing evidence to support decisions and having an involvement in research agendas.

There was also discussion about how to form catchment groups.

''A lot of catchment groups are looking at buying their own test kits''.

In addition, she wanted to encourage schools to take an interest in similar workshops.

''It is about teaching the next generations the importance of water quality.''