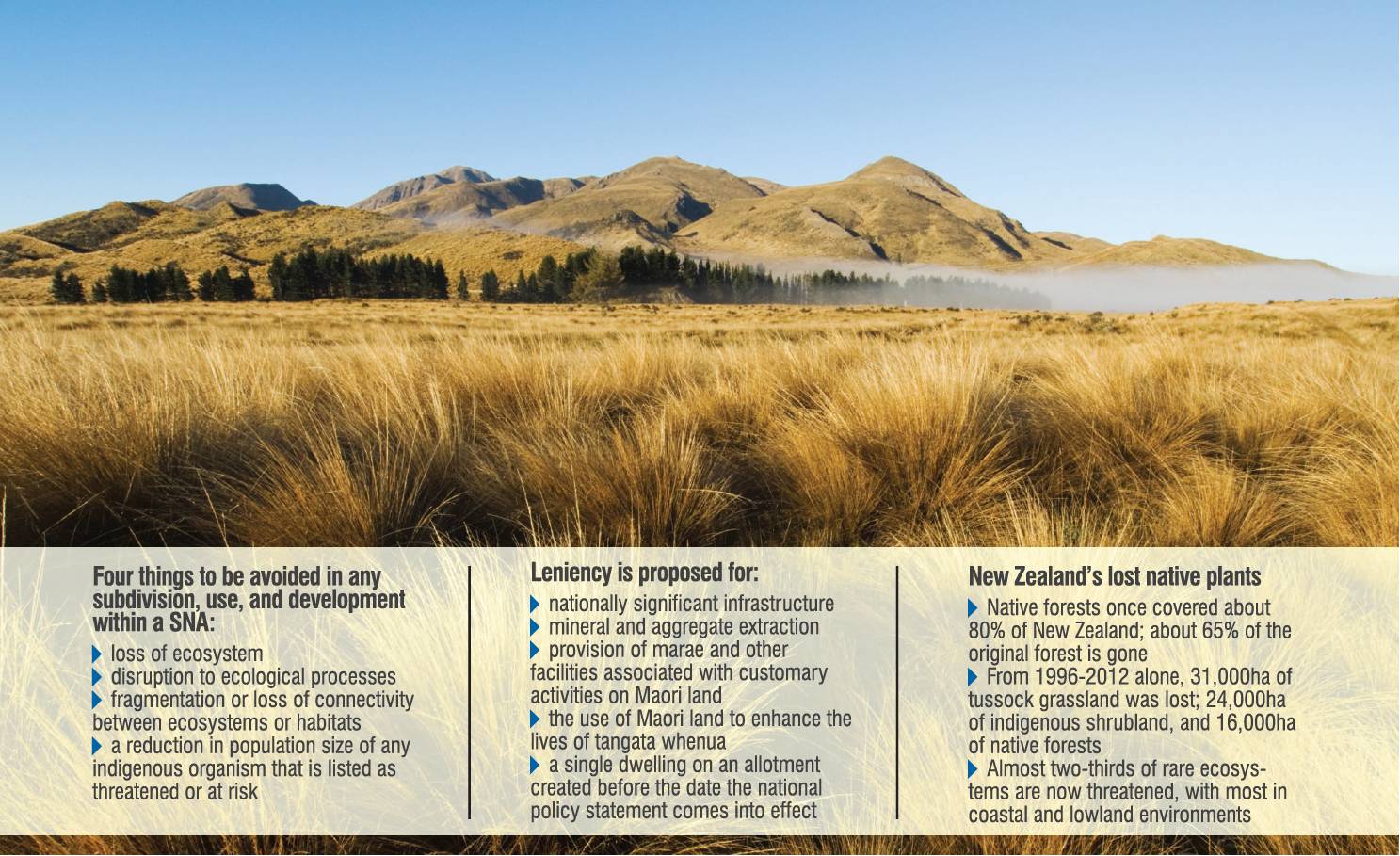 To save native grasslands, forests, and indigenous habitat, new national rules for significant natural areas (SNAs) are in the works. But some have called the process a land grab, and southern councils are now pausing their work. Others say biodiversity continues to be lost to pasture, plantation forestry and urban areas, and the work is desperately overdue. Hamish MacLean reports.

Without identified protected natural areas, farmers and others risk being caught out and facing hefty fines.

But as councils start to map significant natural areas (SNAs) in their districts many accuse them of overstepping their mark.

Federated Farmers environment spokesman Chris Allen said the legal consequences for an Omarama farmer who removed rare native plants from his farm showed the importance of getting the issue of significant natural areas right.

WH McAughtrie Farm Ltd, owned by Dannie McAughtrie, was fined $90,000 in the Dunedin District Court last month after the farmer cleared swathes of sensitive indigenous plants from his property.

He argued in court he honestly thought he was allowed to cultivate the land under existing use rights.

Council lawyer Shelley Chadwick identified the vegetation he cleared as:

In sentencing Mr McAughtrie, Judge John Hassan said the offending threatened the community’s confidence in the council upholding its rules.

But it also undermined community confidence in the protections provided under the Resource Management Act (RMA), he said.

Protecting areas of significant indigenous vegetation and significant habitats of indigenous animals has been listed as a matter of national importance under the RMA since 1991.

However, while the RMA says significant areas must be protected, it does not say how.

This lack of standards has led to uncertainty for councils and landowners, the Government says.

In total, only about 60% of councils have SNAs listed in their plans.

The 40% that do not are now at different stages in the process of meeting the requirements of the RMA, it says.

The proposed national policy statement for indigenous biodiversity promises to provide a standardised approach for identifying areas that are truly significant.

Councils will have a window of a few years after the new rules come in for standardised SNAs to be in their plans.

And now in the rush, some councils’ approaches to both identifying areas and letting people know there are SNAs on their property had been problematic, Mr Allen said.

"Because they haven’t engaged the landowner in the process, they’ve put a circle on the map because they’ve looked at some satellite imagery and said ‘that’s what it is then’."

The Far North District Council paused its work after strong opposition from iwi and farmers.

Several councils in the South took the cue and hit pause as well.

They say they will not continue work to identify SNAs until the national policy statement provides the clarity they need to continue.

The Government says the national policy statement will be complete by the end of this year.

But in the next month or so an exposure draft will be released for targeted consultation.

Mr Shaw said councils with SNAs already in place would have several years to check their work, and the criteria they used, to see if it was consistent with the new national policy statement.

When he released the next draft, councils would see there was plenty of time to apply the criteria set out, he said.

Not everyone sounds reassured.

In Clutha, work on identifying land to be SNAs had not started, council planning and regulatory group manager Ian McCabe said.

The council was holding off in part because it did not know whether there would be any major changes to the proposed national policy statement on indigenous biodiversity when it was finished.

Likewise, Southland District Council environmental planning manager Marcus Roy said some background and desktop work had begun in the district, but no on-site ecological surveying had started, nor would it until the national policy statement was finalised.

The Gore District Council held much the same position.

As part of its district plan review, only the background work for SNAs had been completed, council planning consultant Keith Hovell said.

However, the provisions in the draft document were "unduly onerous" and difficult to give effect to, he said.

Invercargill City Council planning team leader Liz Devery said the council had identified areas of indigenous biodiversity within its district plan, which was made operative in 2019.

However, like at other Southland councils, the desktop studies were done but no work had been done to refine those desktop maps and staff had not gone out to individual properties.

Nor would they until there had been consultation with the community and the landowners.

In the Waitaki district, after letters to nearly 2000 landowners included maps of the proposed new protective overlays on their properties, the council was met with a backlash.

The council had since decided to establish a collaborative rural sector group to be led by deputy mayor Melanie Tavendale, a spokeswoman said.

The angst about the work is not shared evenly around the South.

Each area had been identified by ecologists, and landowners and residents had the opportunity to submit through the first stage of the district plan review, she said.

They were identified using similar criteria to what was in the proposed national policy statement, Dr Johnson said.

While councils feel pressure from landowners who say they will lose productive land or new SNAs would devalue their land, there is some frustration among conservationists that the work is not yet done.

The process of identifying significant areas should help everybody learn about what was around them.

"People will continue to be able to farm the land as long as it doesn’t destroy what’s left," he said.

"In New Zealand property ownership is a bundle of rights and responsibilities, one of which is to look after the nature that happens to call a property home."

Green Party environment spokeswoman Eugenie Sage said the issue of SNAs had been fraught from the get-go.

Ashburton was the first council to get its district plan operative under the RMA and SNAs were being debated way back then, she said.

The present effort to finalise a national policy statement for indigenous biodiversity was about the third time the issue had been tackled, Ms Sage said.

Nothing has been decided on incentives for SNAs, but the Government is looking at options; these are expected to be outlined alongside a final national policy statement.