Innovators want wool to take to the sky 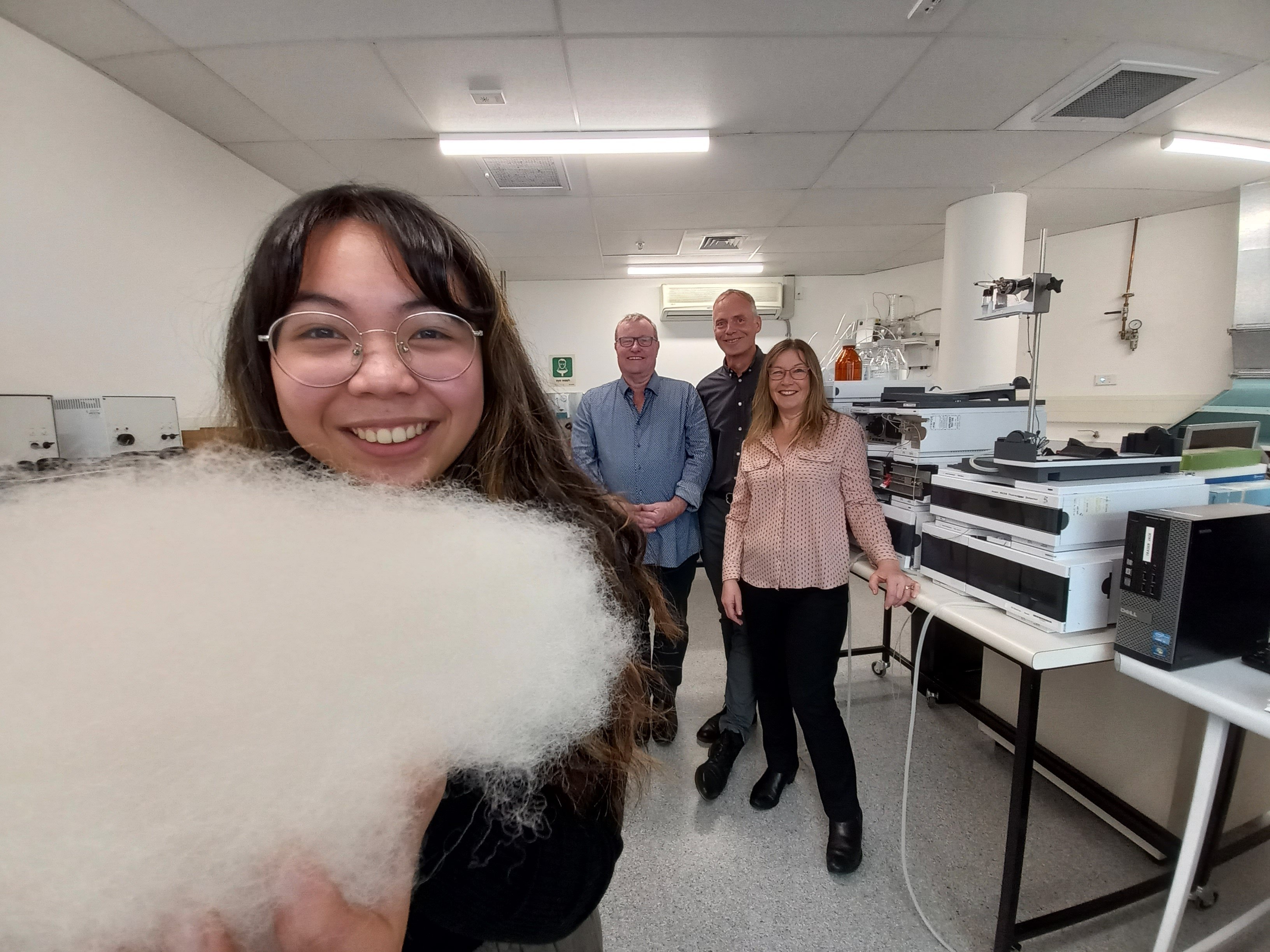 University of Otago food science student Martha Thay holds a sample of wool being used in a project looking at using the fibre in the aviation industry. In the background are University of Otago agribusiness innovation professor Craig Bunt (centre), and Brent Gregory and Suzanne Wilson from The Merino Softwear Company. PHOTO: SALLY RAE
Wool might tick all the boxes as a natural, sustainable and environmentally friendly fibre, but New Zealand’s strong wool growers are still not reaping the reward for producing the best strong wool in the world.

Business and rural editor Sally Rae talks to those behind two diverse projects to add value to the wool clip.

Brent Gregory has a theory: people who need wool do not know the fibre exists and those folk never meet up with those selling wool, leading to a major disconnect for the wool industry.

Mr Gregory and Suzanne Wilson, of Christchurch, are directors of the Merino Softwear Company, an innovation company looking to create high-value products from wool.

One of the new potential markets they have identified is in the aerospace industry.

Working on making a composite using wool for aviation could be the most exciting project to come out of New Zealand, Mr Gregory believes.

"You can’t get to Mars with the current composites. That’s where the opportunities are," he said during a visit to the University of Otago this week.

The company was about communicating the value of wool to new partners and challenging market perceptions of wool, ultimately to create value for both industry and growers.

Mr Gregory has a long history in the textile and fashion industry, including strong knowledge of fabric development, while Mrs Wilson has close to 30 years’ experience in the clothing industry.

They worked side by side in separate businesses until five or six years ago when they looked at doing something together.

They chose to look at wool and investigate if there were other markets where it could be a solution to issues.

Wool was the most technical fibre on the planet and the only one that could not be reduplicated in a laboratory because of its complexity, Mr Gregory said.

Composite materials played a significant role in aerospace components — an industry Mr Gregory was also familiar with as he used to fly composite gliders — and the duo wondered whether the attributes of wool could make a difference in aviation.

One of the biggest factors was its fire-retardant properties which could add safety to the industry, they believed.

Given where markets were heading with sustainability and carbon credits, current composites would struggle to meet those goals, whereas wool was a biodegradable fibre and a wool composite should also deliver great moisture management, Mr Gregory said.

Mrs Wilson, who grew up on a farm in Canterbury, said it would be a high-margin product, rather than strong wool going into the bottom end of the market.

A few years ago, the pair were introduced to Prof Craig Bunt, who was then at Lincoln University. He is now the inaugural professor of the University of Otago’s agricultural innovation programme.

That programme, which began in 2019 in response to the changing agricultural industry, was designed to focus students’ learning on the major issues and innovation required to support the future of the industry, as well as developing leaders.

Prof Bunt started having conversations with the Merino Softwear Company about their idea for a composite, and while it was still in its early stages, he said the more he looked at it, the more exciting it got.

Mr Gregory said they had done market research, getting feedback and gaining insights into challenges.

It was also vital to ask potential customers if they had something they might be interested in.

Young minds needed to be encouraged into the industry and if research could be done for big projects, such as the wool composite, that would attract offshore investment.

He rued how New Zealand had "given away" its intellectual property, whether cement, pine trees, disposable syringes or kiwifruit.

There was a need to "think big", attract end users, build a research and development base and then hopefully start building a manufacturing base.

Fresh eyes and new perspectives would bring a "totally different outcome" from what there had been in the past.

He believed New Zealand had lost its entrepreneurial No8 wire approach.

The wool industry was potentially only two or three years away from going from an industry to a hobby, Mr Gregory believed.

Over summer, University of Otago student Martha Thay had come on board to work on the project, funded by Callaghan Innovation.

The team now had some prototypes and samples.

Prof Bunt said the timing was good for the project; data was starting to come out about how truly sustainable and efficient the sheep industry was.

Mr Gregory said an upside of the Covid-19 pandemic was that globally, many people were at home and were therefore more accessible.

The project team had been able to build relationships and, now that borders were opening up, they could start building on those.

Mr Gregory said he was a firm believer that "persistence pays off".