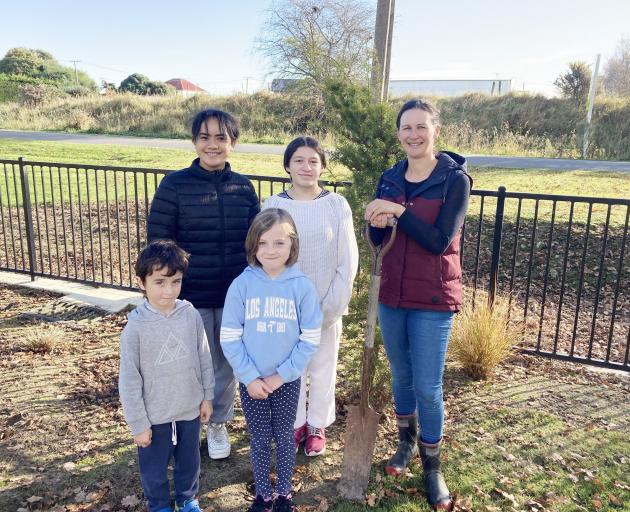 Looking forward to a community planting day at Moeraki tomorrow are (from back left) Anna Latuselu, Tiara McCormack and Hanna Stalker and (in front) Tyson Geary and Ella Stalker. PHOTO: SUPPLIED
It was an involvement with the Dairy Industry Awards which spurred Hanna Stalker’s passion for the environment.

Back in 2016, she and her husband Callum won the Otago-Southland Share Farmer of the Year title and were third in the national final while 50% sharemilking at Otautau.

The couple now live at Hampden, and Mrs Stalker is involved in organising a meeting to explore the practicalities of setting up a farmer-led catchment group for the area between Shag Point and Waianakarua.

That meeting will be held tomorrow at Moeraki Hall at 11am. Representatives from the Otago Catchment Community and North Otago Sustainable Land Management (NOSLaM) will speak on their experiences of catchment groups.

A barbecue lunch will be followed by a community planting in a cleared area near the hall, with the assistance of pupils from Hampden School.

Forming a catchment group had been mooted for some time due to a gap in the area.

NOSLaM covers about as far south as Herbert and the East Otago Catchment Group as far north as Shag Point.

Mrs Stalker previously worked in DairyNZ’s environmental team and had seen what good could come out of catchment groups.

With NOSLaM, she had also seen the "positives" of bringing communities together and getting positive outcomes, education and changes on-farm.

With the raft of regulations farmers were facing, along with council plan-changes, it helped if there was a group that could provide feedback and also help farmers through the process, she said.

Originally a "townie" from Christchurch, Mrs Stalker completed both science and business studies degrees, majoring in agriculture and marketing at Massey University.

In her final year, she got a Landcorp scholarship and part of that was a job opportunity with the state-owned farming company, so a shift to Mossburn ensued. While in the South, she met her future husband Callum.

She worked for Landcorp for about a year and then moved to LIC where she spent about three years.

At that stage, she and her husband were leasing some land and he had a mobile sheep crutching operation.

Eventually the couple ended up changing direction and getting involved in the dairy industry.

They worked their way up the sector’s ladder to the Dairy Industry Awards (DIA).

"I had a real passion for genetics from working for LIC and then, having them look into the environmental side of things through DIA, really opened my eyes to what impact we as farmers could have on the environment and the impact we could have to improve it," she said.

They now do bull beef finishing and Mr Stalker works as a stock agent.

Mrs Stalker was elected to the Otago Catchment Community’s steering committee last year and said she enjoyed seeing what all the different catchment groups were doing.