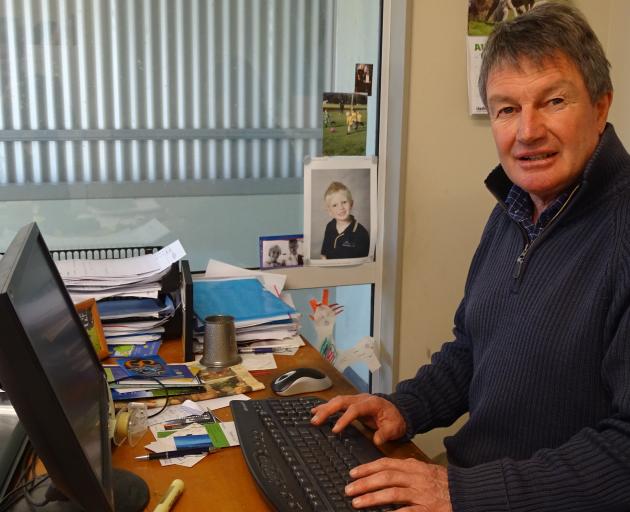 Wanaka sheep breeder Andy Ramsden is developing wools to meet the needs of the future. PHOTO: KERRIE WATERWORTH
A Wanaka farmer and sheep breeder who has developed wool for some of the world’s most sought-after Covid-19  face masks is already thinking of new value-added ways to use coarse wool in other industries. Kerrie Waterworth reports.

Five  years ago Andy Ramsden was looking for a home for a new type of wool from his trademarked Astino breed.

At a presentation in Queenstown by a New York consultancy firm on the state of the New Zealand wool industry he met the chief executive of Auckland-based air filter producer Lanaco, Nick Davenport.

Mr Ramsden said they sat down for a quick cup of coffee and stood up four hours later.

He said Mr Davenport had recently discovered the opportunities wool presented for air filtration, and realised he needed an exclusive breed of sheep to get fibre of the right consistency and annual improvements.

"I could create what he wanted and the Astino breeding programme has been developed for Lanaco ... and we are well on our way now," Mr Ramsden said.

"My father couldn’t buy the type of ram he wanted, so he started breeding them himself. He was part of a new way of thinking in the Romney world of a higher-performing animal that was not so much selected for its appearance than for its performance."

He probably absorbed some of that "future thinking" from his father.

"In Hawke’s Bay I shifted my lambing percent from around 130% to around 180% by using new genetics and then learning the nutritional requirements of ewes with twins and triplets were quite different from when we grew up."

Mr Ramsden moved to Wanaka and started and sold one genetics business before establishing Headwaters in 2006.

"When I departed Headwaters it was on its way doing a great job with good people to create its new Te Mana lamb in partnership with the Alliance meat company and that is going from strength to strength.

"But I wanted to get back to doing something about wool, which was struggling and is struggling.

"We are all aware wool is a wonderful fibre but it has been struggling to really reward the wool grower properly."

"I take a completely new approach. I decide what the end game is, then I go and find the breeds that might contribute to get me there the quickest."

Dedicating a breeding programme to an end customer was one way to create a high-value wool product, he said.

"If you own your own breed you can measure. In Lanaco we measure each fleece in our genetics programme and only use and breed from the sheep that have the attributes for what we need for filtration, so we start to reduce the variability and improve the functionality for our use."

Lanaco produced the best fibre for air filtration and it would be very hard for someone to match it because it owned the breed and was always improving.

"We keep testing our animals that are part of our programme, and when you have a variation of outcomes where one animal’s fleece is better than another then you breed on from the known one and incrementally you get your average spreading up towards your top animals a lot faster," he said.

Mr Davenport has described Mr Ramsden as a visionary but Mr Ramsden said he was more motivated by what was possible and was always looking 10 years ahead.

Mr Ramsden said he would be stepping back from the physical side of farming in the next year but not from the genetics.

"I am already designing much larger breeding programmes for a much larger volume supply of wool to meet the growing opportunities that are coming to Lanaco and I could do that for another decade."

He predicted future wool genetics would provide fibre for filtration use in buildings, electric cars and smart outdoor wear that was not worn next to the skin.

In 2018 Lanaco’s wool-based filter technology was put through a 12-month evaluation alongside other fibres and chosen by Nasa to protect astronauts in the event of on-board fires.

Mr Ramsden said being Nasa’s preferred option did not equate with high volumes "but more than anything else it technically validates what we are about and completely independently proves the merit of what we are about".