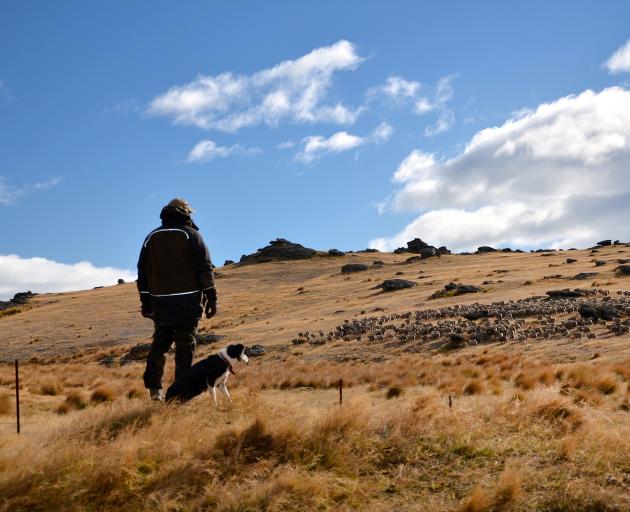 At Matangi Station, the Sanders family are firm believers in the adage that there are only two types of sheep in the world - merinos and others.

Four generations have pursued a passion for the breed and that looks set to continue with the fifth generation - Todd - already exhibiting a love of animals and the lifestyle the Central Otago high country property affords.

The family's pride in producing high-quality fine wool was rewarded recently when Matangi was presented with Reda Group's Marque of Excellence 2018-19 - or top supplier in New Zealand - at a function at Lake Hayes.

The announcement left third-generation farmer John Sanders "dumbfounded" while his son Brett was also very proud to see the influence of Matangi genetics in other suppliers to Reda contracts.

Brett (left), Helen, John and Mary-Liz Sanders are third and fourth generation to farm Matangi Station.
Matangi - which Brett Sanders describes the family as being privileged to be custodians of - has been in the family for nearly 100 years. It was bought by John's grandfather J. C. (Jack) Sanders in 1923.

He had previously run a grocer's shop in Alexandra but when he saw the better returns being made by his brother, a rabbiter, he sold the store and went rabbiting himself, which enabled him to buy the property.

It was originally part of the vast Galloway Station, one of Central Otago's pioneer runs, which was first established by Scottish brothers Watson and Alexander Shennan in 1858 and divided up in 1916.

Only a short drive from Alexandra, behind the town's famed "clock" hill, its location in Little Valley - where other extended Sanders family members are on neighbouring properties - it could be a world away from civilisation. 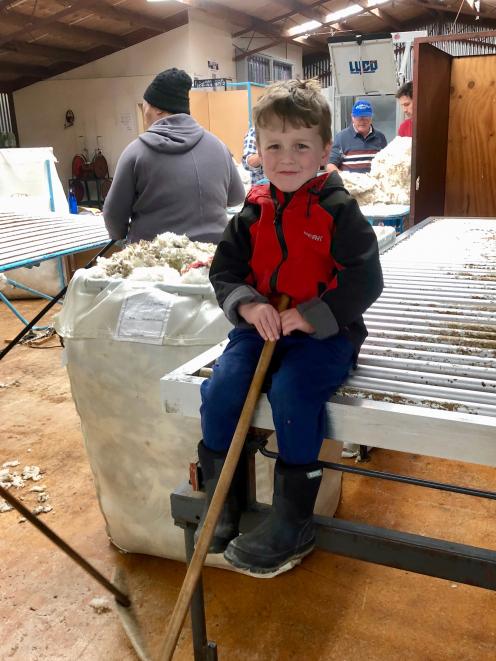 Todd Sanders (4) is the next generation. PHOTO: SUPPLIED
In fact, John Sanders, who has travelled overseas representing New Zealand in curling, reckoned the area was indeed "unique" - he had not seen anything else like it anywhere.

Climatically, temperatures went from the extremes of hot and cold, while the country was "just different", he said.

Although that could vary - John Sanders has seen it under seven inches (18mm), while, last year - the best year he had ever seen - was nearly 20

Merinos thrived in the dry and that was reflected in the quality of the Matangi clip. The Sanders had stayed with the same type of wool, producing spinners' style for the Italian market.

The sheep on the property could be traced back to those first merinos imported by the Shennan brothers in the 1860s.

Matangi's stud was established in 1940 with the purchase of sheep from the dispersal of the Puketoi stud, originally registered by Watson Shennan.

Some of the stud's original sheep came from the King of Prussia's stud in Saxony in 1862. Brett established a poll merino stud in 2013.

Like his father John, and grandfather Alec, Brett Sanders grew up surrounded by merino sheep.

After leaving school in 1993, he headed to Lincoln University the following year for three months for a wool classing course. There was a sense of deja vu, as he had also gone to Lincoln when he was 4 years old, when his father did the course. 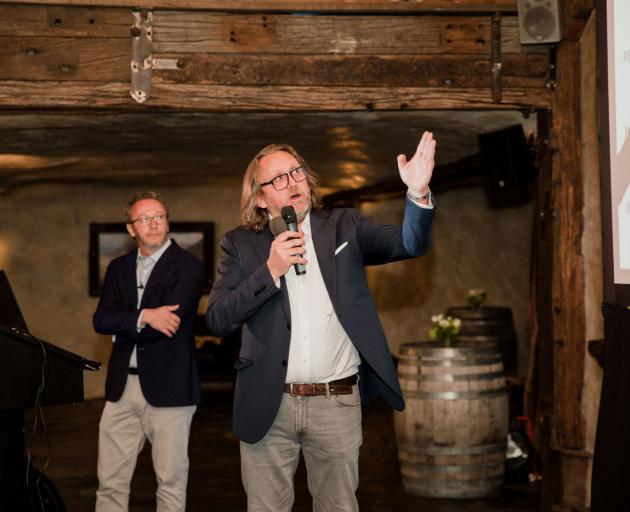 Reda’s chief operating officer Francesco Botto Poala addresses the Reda Marque of Excellence Awards, at Lake Hayes, watched by raw material purchasing manager Fabrizio Botto Poala. PHOTO: HOLLY WALLACE
He never contemplated doing anything else but farming, although he did head overseas for three and a-half years on his OE to "have a look around".

He worked in Western Australia and the United Kingdom.

He met his future wife, Helen, at a pub in the UK.

Brought up next to a farm in the Midlands, she quickly became accustomed to the farming way of life in Central Otago.

"I've always liked peace and quiet. To me, it was lovely. I just thought, `this is amazing ... I just love it. What's not to love about the place?" she enthused, from her home with its view of the valley vista.

She quickly learned to drive a hay rake, got the hang of a drenching gun and also became a dab hand at whipping up scones.

When it came to the current state of the farming sector, Brett Sanders said there were many influences they now had to work with to continue the way they were farming for the future.

Merinos through the seasons at Matangi Station.
But it was sustainable farming and had been for a long time; Matangi had always been a low-input type operation and they were doing their best to maintain that.

When it came to ethical farming, "you can't get much better than high country merino", he said, while his father added that it was "the right sheep for the right country".

The family enjoyed good relationships with local businesses and the community, allowing access to Matangi apart from lambing time.

For many people, it was an opportunity to ride their mountain bikes or simply "de-stress" in a spectacular environment.

Giving back to their community was something that was very important to them. Social responsibility was growing and, if they could do that and still maintain farming as the core part of their operation, then "everybody wins", Helen Sanders said.

Visitors often could not comprehend the vastness and serenity of such a place like Matangi, she said.

Accommodation was also offered on the property and they enjoyed sharing their knowledge - and passion for farming - with visitors.

"We are so passionate about the product, the wool and the farm. It's just ingrained in us, we love it. We love sharing the knowledge when people come ... explain what we do and how we do it," Brett said. 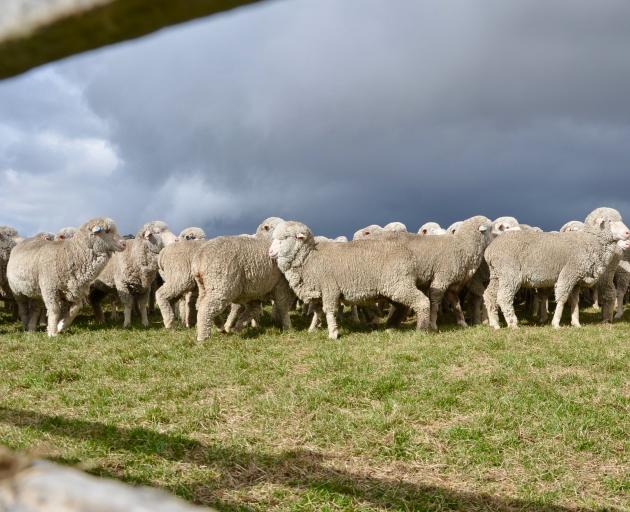 The Sanders family have been involved with the New Zealand Merino Company since its establishment and they were proud of what they organisation had achieved.

It had pushed the boundaries to make the industry grow at a time that it was in the doldrums.

"They were sticking their necks out, going out to the world," Brett said, while his father added that it had knocked on doors that "had never been opened before".

Matangi was audited to supply ZQ certified wool, launched by NZM in 2007 as the world's first ethical wool brand.

The Sanders were thrilled to see NZM recognised - on the night of the Reda presentation - at the 2019 New Zealand International Business Awards, which celebrated the success of New Zealand businesses on the world stage.

In 2016, Reda signed a $45million deal with NZM. Under a five-year contract to source fine wool from NZM, 2500 tonnes would be shipped to Italy.

The Italian textile company, owned by the Botto Poala family, is based in Biella, in the north of Italy.

Exports represented about 80% of its turnover and were mainly concentrated in the United States, Germany, China and Japan.

Fabric was supplied to such big names in the fashion world as Hugo Boss, Ermenegildo Zegna, Armani, Ralph Lauren and Gucci.

Reda also owned 30,000ha in the Waitaki Valley and the Mackenzie, farming merinos on Rugged Ridges, Otamatapaio and Glenrock stations, and Matangi has supplied rams to it.

Reda was very family oriented itself, which was something that appealed to the Sanders family.

John also liked how it was not just about suits, and the company had diversified into other avenues, including activewear.

Brett and Helen had visited Reda in Italy and described it as an "incredible" experience. They were blown away by the technology at the mill.

The company had a strong environmental focus and the water used to wash the wool was then recycled and used for power generation.

All of the Reda team were "so super passionate" about what they did. In the past, when the wool left Matangi on the truck, that was "the end of it for us - job done for us" - but to see where their wool now went, and the passion and drive that Reda had, along with the relationships they were building, was very special, Brett said. 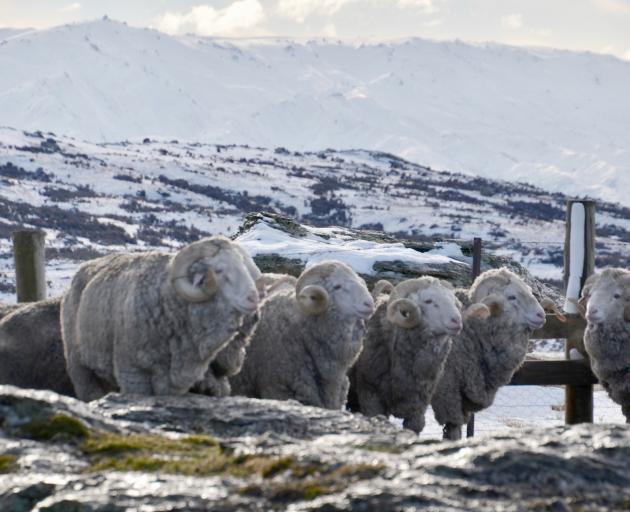 John Sanders' dream had always been to go to Italy and that looked to be realised with his wife Mary-Liz as part of the Reda prize was a trip to Italy.

The family was also full of praise for contractor Peter Lyon Shearing, saying they would not receive awards like the Reda one if the wool was not harvested properly.

John Sanders is on the board of the New Zealand Wool Classers Association, a move due to concerns he saw about five years ago about the lack of classers coming through the system.

When it came to their sheep, they might be keeping with their traditional bloodlines and sticking with that spinners' style wool, which had been beneficial for them, but they were also adapting modern technology.

That was something that each generation had brought in - whether it was John replacing horses with motorbikes for mustering - or the recent introduction of EID (electronic identification) tags.

Brett was also a pioneer of using a drone on the farm in 2013; that was initially driven by a massive snowfall and they could not get to their wethers, helicopters were busy elsewhere, so they put a GoPro camera on a glider and flew over. Brett had since become a keen drone enthusiast.

Like many Central Otago properties, rabbits used to be an ever-present pest; on the first year on Matangi, 112,000 rabbits were killed and there was no relief until the arrival of the rabbit calicivirus in 1997

John Sanders did not miss having to spend three or four nights a week spotlighting, quipping that meant for a better family life in the evenings.

In a statement, Reda said the award came from a desire to give official recognition to the farms that, over time, had shown strong sensitivity towards animal welfare and the ecosystem.