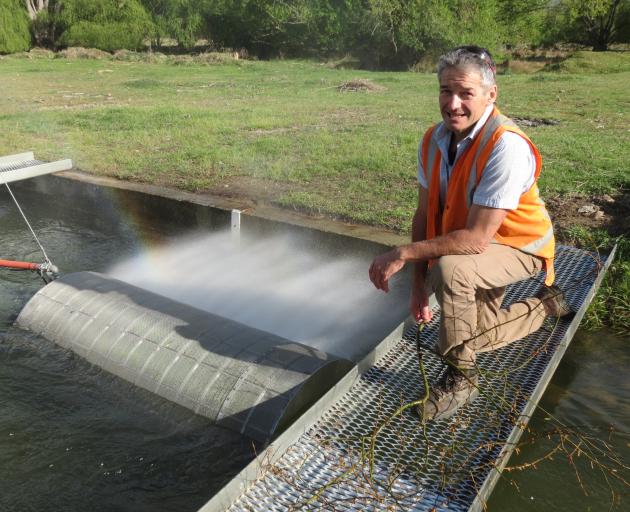 A new, specially adapted, self-cleaning, fish-friendly screen has been added to prevent fish and other debris from getting trapped.

The water leaves the Manuherikia River, travels up a race, through the pumping infrastructure and then back to the river.

The company's 76 shareholders have access to pumped water for irrigation.

Aqua Irrigation Ltd, which is contracted to the company to maintain the irrigation system, had the screen installed about two weeks ago.

Managing director Tim Anderson said raceman Greg Dobson was employed to look after the infrastructure, including the pumping equipment, pump shed and races.

Until two weeks ago, Mr Dobson had to make several trips to the pump station each day to clean the old screen, which protected the pumping system from accumulated rubbish.

''We got all sorts of willow leaves, weed and algae and fish coming through the water,'' Mr Anderson said.

''Up to now the old screen was manually cleaned and that was done three of four times a day and it was a significant part of the operation.''

The company had installed the new screen that had been adapted to the specific requirements of the Galloway system.

It handled a maximum of 350 litres per second.

Mr Anderson said the screen rotated and jets of water inside the drum sprayed against the mesh, forcing any rubbish or fish off the outer surface.

''We have built little concrete walls and a new inlet structure.''

He said while there were a couple of other screens on schemes in the region, this particular one was ''unique in that situation''.

''With the water velocity going through, it stops any fish or wildlife being sucked against it,'' he said.

''It is also designed to meet regional council requirements.

''This is a step up for Galloway, which is a very old Ministry of Works system.

''It is a quantum leap for them, going from a system that was heavily dependent on labour to something that is fully automated.

''What they had before was labour intensive and not particularly efficient.''

He said the $35,000 cost represent a significant investment for the company.

''We expect it to last at least 20 years before it needs any significant maintenance,'' he said.