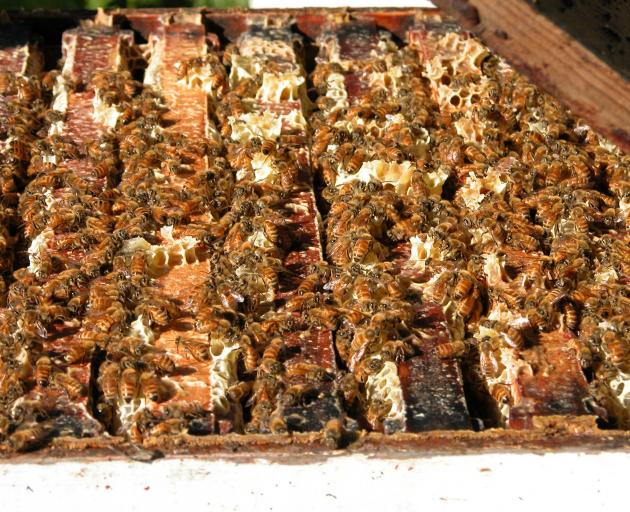 If a hive is infected with American Foulbrood, then it has to be destroyed. The Southern Beekeepers discussion group is running a sustainable farming fund study, Clean Hive, to determine the best method of infection detection. Photo: SRL archive
The Southern Beekeepers discussion group has completed the first two rounds of sampling southern beehives at sites in Mosgiel and Lake Hawea for the American Foulbrood (AFB) research project, Clean Hive.

However, a major AFB outbreak in the North Island is keeping the laboratory they are using busy with samples, so the results have been delayed.

The sampling is part of the beekeeping industry's research project to trial three different methods to detect the disease in hives before symptoms become visible or clinical.

The group was given $143,000 by the Sustainable Farming Fund last year to trial the tools and compare their effectiveness.

If successful, hive testing could be completed faster and more accurately, and infections could be detected far earlier.

They are also using the conventional microbiological plating techniques, which involved growing cultures of the disease, as well as trained dogs, which can detect the AFB presence.

They also sampled bees inside the hives as part of the qPCR test, and also took samples at the hive entrances.

''There is a lot of work involved to dismantle hives, take samples and put them back together.

''If we used an over-sized cotton bud at the entrance it would be a bit easier.''

Mr Scandrett said in addition to the sampling at the sites, some of the group's beekeepers were also taking samples of hives, which were known to have AFB.

''The samples will help calibrate the tests.''

Dogs trained by Rene Gloor, of Rene Gloor Canine Ltd, of Dunedin, to smell the disease in the hives, were also part of the trial, and the dogs will eventually be 'calibrated', along with the other two methods.

''We don't know what they are smelling when they indicate at a particular hive,'' Mr Scandrett said.

''When biosecurity dogs at the airport indicate [they have found something] we can see it is food and the dogs are right.

''But the problem is we can't see AFB, so when a dog indicates, we don't know how accurate it is.

''While the dogs had been successful in detecting hives known to be infected with the AFB, they also sometimes indicated hives had it, but those hives did not develop it.

''Dogs also indicated on sites that had AFB six months ago [and the hives had been destroyed].

''It might be there is a nasty smell with AFB material with a different type of bacteria making the bad odour.''

Incidents of AFB were increasing by about 15% a year because of industry intensification.

If undetected, bees can spread AFB to other hives, or infected hives can be divided or sold.

Once the clinical symptoms were visible in the hives, it was too late and beekeepers had no choice but to burn the infected hive within seven days.