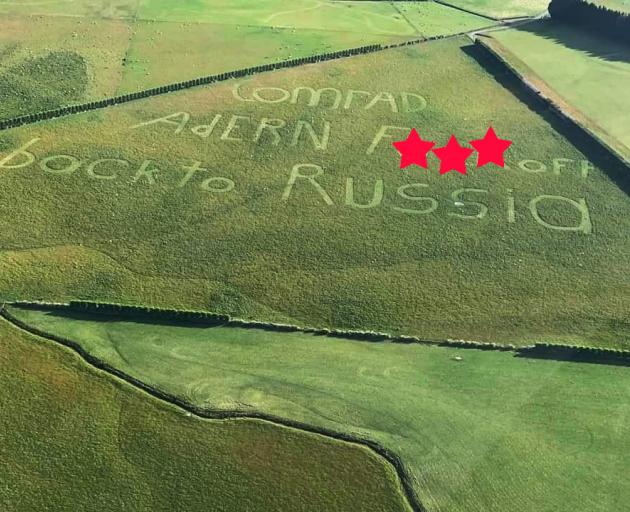 Pilot John Sarginson posted to Facebook an aerial photo of a Southland field which had the words "Comrad Adern f*** off back to Russia" [sic] mown into it.

“A friend who regularly flies between Invercargill and Christchuch sent me the pic he took. It’s below our national carrier's flight path so anyone with a window seat has an opportunity to view on a South Island fine day.”

Views of the message varied. Someone commented "Imagine putting 10 hours in mowing this but still not knowing how to spell comrade or Ardern", while another read, "That is art work ... We need this displayed at every school, office, every institution in this country".

Some questioned the legitimacy of the photo but most seemed to accept it as unaltered.

Someone on Twitter said they, "predict a Photoshop" and in response, another tweeted, "me too — such well formed lettering and artistic use of fonts and caps. A very, very artistic and skilful farmer indeed."

It is not the first time a farmer has spoken in similar terms about Prime Minister Jacinda Ardern.

Shortly before the last election, a Morrinsville protester held a sign that read, "she’s a pretty communist".

A spokesman for the Prime Minister said her office had no comment.

Come on, tell us where this farm is. Farmers obviously get it too easy if they have the time and money to show their lack of education in this way. Time for a tax increase on diesel and farm machinery.

@Grizz
Hahaha Can you see the immense irony in your response, considering that the farmer is calling Ardern a commie?

I wonder if people got communism and socialism so easily mixed up in, say, the 1920s-1950s.

On a sliding scale from 1 (Classical liberal) to 10 (Communist) Comrade Ardern would score about 7.5
She's no Lenin or Stalin, but many of her fundamental presuppositions appear to match those of the Russian Marxists. For example, her focus on equality of outcome, no matter the cost.

What on earth?! Ardern's response to the mosque shootings had nothing to do with Russia, communism or socialism

What on earth indeed.... You have drawn an incredibly long bow to link it to Chch all by yourself.
It's a talented person to stitch that and this together from thin air

Where in the article or in the message does it mention anything about the shootings?.
Seems you are trying to make this bigger than it is.

@ Peter35 The message on the field made no reference to the mosque shootings....?? I don't see your point

I assume this farmer will follow with a likewise message highlighting Simon Bridges's and National's links to the Chinese Communist Party. Or maybe it is the colour association that he had picked up on...