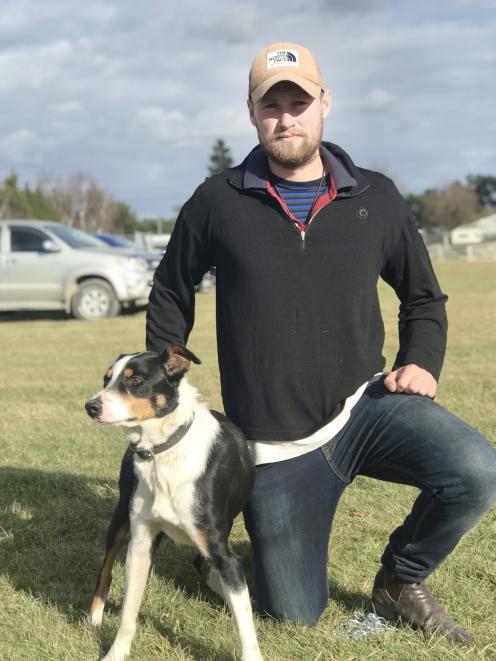 Jack Mansfield with Jack the dog, who sold for a record $10,000 at the Ashburton dog sale, at Mayfield last week. PHOTO: MANDY COOPER
This is the story of a dog called Jack.

Bear with, as it can get a little confusing given that Jack - sold for a record price of $10,000 at last week's PGG Wrightson Ashburton dog sale at Mayfield - was bred by another Jack.

Mr Boys owned Jack's sire and it was "general rule of thumb" to give a pup in return.

Mr Boys, a retired farmer who lives in Timaru, named the pup Jack and trained him up.

However, when he moved into a retirement home, his dogs had to go and he gave Jack back to Mr Mansfield to see if he could sell him.

Jack had been with Mr Mansfield for the past few months, getting some fine-tuning, before being offered for sale at the Mayfield A & P showgrounds. The $10,000 he fetched was the highest price paid for a working dog in the sale's 63-year history.

Mr Mansfield was optimistic Jack would fetch a price "up near the top", given he was a good, proven dog and that Mr Boys had a very good name for his dogs.

Jack was bought by Charing Cross farmer Joe Catherwood and both Mr Boys and Mr Mansfield were delighted with the result.

Mr Boys, who successfully competed at dog trials for more than 50 years, had played a key role in establishing Mr Mansfield's own interest in dogs and trialling.

When the young farm manger started out shepherding, Mr Boys helped him find his first good heading dog and that gave him a good start and got him interested.

"He just taught me a few things along the way," Mr Mansfield said.

Mr Boys also gave him his very good huntaway Gem when he moved to the retirement home and the pair had forged a successful partnership, qualifying for the South Island and New Zealand championships. Gem was also named top huntaway in the Wanaka club.

Originally from a farm at Ikawai, Mr Mansfield is president of the Wanaka Collie Club and in his third season of dog trialling.

Dog trialling was a sport that went "hand in hand" with training a dog and taking it to the next level.

The benefits from that training were reaped at work and training could be done at work.

"Not many hobbies you can actually fine-tune [training] and get paid for it," he said.