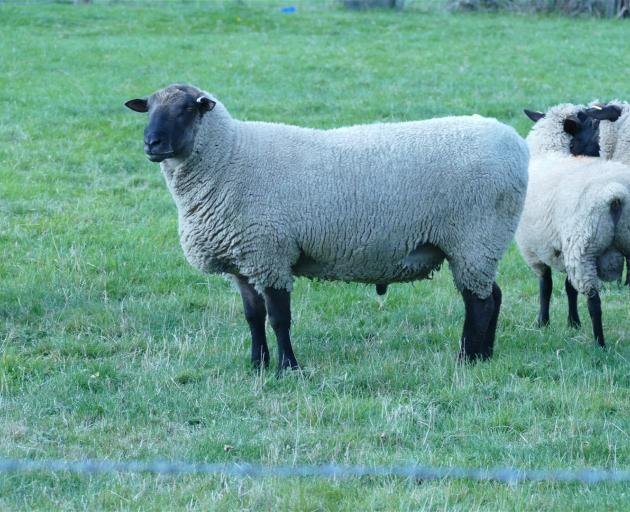 Duane Davis’ new Bellfield Stud South Suffolk ram. Photo: Ken Muir
Not all sheep studs have to be massive operations, and Duane Davis' South Suffolk operation on a lifestyle block on the outskirts of Mataura is a good example of this.

''While we've moved around a bit over the years it's been good to come back here and settle in.

Mr Davis has a 2ha block of his own and leases a similar-sized block from his neighbour.

He runs a ram and 22 ewes and will keep the ram, newly acquired from Bellfield Stud, seven ewe lambs and seven ram lambs.

He said he has had a lot of help along the way improving the quality of his progeny but as with all breeders it's often been a matter of trial and error.

''I'm aware of the need to improve the quality of my pasture, given there has been little done with it over the years,'' he said.

''I do have to be aware of the costs given the scale of my operation, so it's very much about moving ahead in small steps.''

Mr Davis is an avid participant in A&P shows.

''I enjoy seeing what else is about and I also like to help out with ram fairs,'' Mr Davis said.

''It's always good to know what other breeders are doing.''

He said he loved the shows and and watching people proudly displaying their animals.

''While some of the presenters can be a little competitive, on the whole everyone gets along and helps each other when needed.''

Judging often seemed more art than science, Mr Davis said and different judges often look for different things and it was just a matter of being aware of the different emphases of the particular judges.

''Another thing I enjoy is competing against the people who provided me with a lot of help and advice when I was starting out,'' he said.