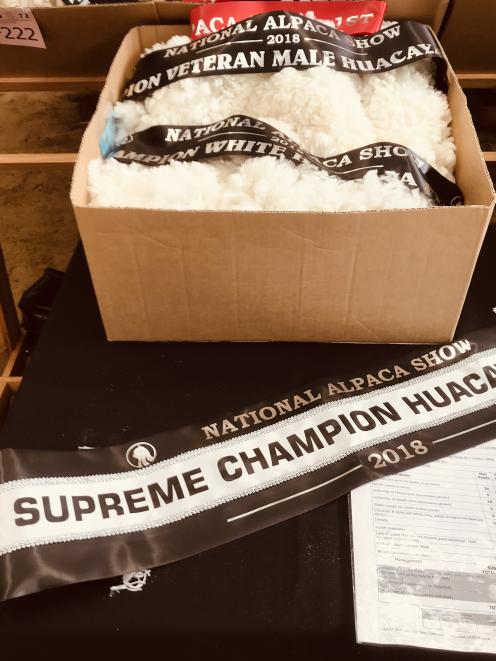 Chris and Liz Strack, of Ohoka near Rangiora, might have retired champion white huacaya male Stoneleigh Valentino to stud, but that did not stop him winning supreme champion huacaya fleece at the National Alpaca Expo in Christchurch earlier this month.

Mrs Strack said the fleece was from Valentino's last shearing last year when he was nearly 7 years old. Valentino will turn 8 on February 14.

''He did really well, particularly when you consider he's an older animal. It's quite unusual for an alpaca of that age to still be winning.''

She said an alpaca's fleece normally got coarser as the animal aged.

''It's like a merino fleece. If you get a coarser micron it can add prickle factor and no-one wants to wear that in their garment.''

The couple has now won nine titles altogether, the most for a huacaya alpaca breeder in the history of the competition.

Stoneleigh Drama Queen, sired by Valentino, won champion adult female huacaya and champion white huacaya and has been sold to a breeder in Britain.

At the other end of the age scale, the supreme champion huacaya alpaca ribbon went to Banks Peninsula couple Frank and Anya Walkington for their junior male Shamarra Diesel, while the top suri alpaca and fleece ribbons were won by North Island alpacas.