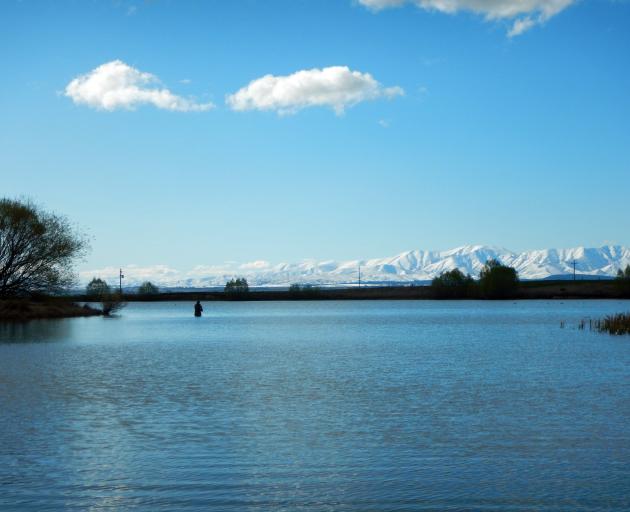 A lovely day on the Mathias Dam in Maniototo. Photos: Mike Weddell
The weather forecast for the weekend is not great but at least it is supposed to be warmer than the last few days.

If the water temperature gets above 10degC, then even if the river is a bit higher than desired, there is a chance of a hatch of fly and feeding fish.

Again, small streams are the best bet as they warm and drop faster than bigger rivers. The best time of day is from noon to 4pm, although if it is a warm sunny day activity may start earlier.

I have been fishing Sullivan's Dam a few times lately. It is a pleasant place to fish, except when there is an easterly blowing with accompanying rain.

The one thing that has spoiled it for me and many others, I suspect, is the amount of dog faeces. On the grassy part to the left of the dam, piles of it were encountered every few metres. 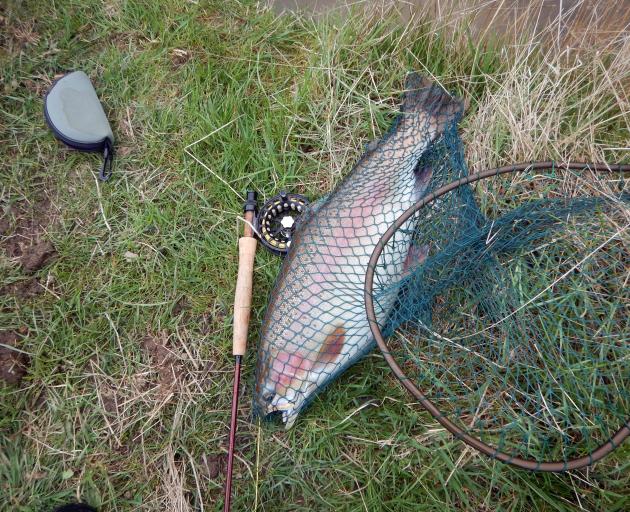 A trout from the Nenthorn Dam.
Families often picnic there and this must detract from their enjoyment, as well as forcing them to keep a constant watch on toddlers so they don't get covered in it. Let us hope dog owners can be more responsible as they are in places more in the public eye.

Sullivan's Dam, the Southern Reservoir and Tomahawk Lagoon, along with others in Otago, are stocked with rainbow trout by Fish & Game and some have resident brown trout. They are well worth fishing. Two years ago I had my best fish of the season from Sullivan's.

The easterly wind mentioned above, as well as being unpleasant to fish in, reduces fish activity as it is caused by a low-pressure system and fish activity is reduced in these conditions. They can still be caught with persistence. There may not be any rises but getting the fly down deep will increase the chances of a fish or two.

I fished one of the dams that are stocked at the weekend, Nenthorn Dam, or rather dams as there are two dams just a few metres apart. The outflow from the upper dam feeds the lower dam and I think only the upper dam is stocked but there are fish in the lower but the fish must drop down into it.

On several previous visits I have only landed fish from the lower dam. In fact, despite seeing quite a few fish in the upper dam I had not even had fish tail my fly.

My inability to catch fish in the upper dam seemed to be continuing for most of the day, although a couple of small ones did have a go at the fly without being hooked.

Later in the afternoon I hooked a good-sized fish, fishing slow and deep. I was only in contact for a few seconds as on feeling the hook it took off and smashed the leader. Depressed and inspired at the same time, I persisted and ended the day with my two best fish of the season.