Spreading of virus to begin 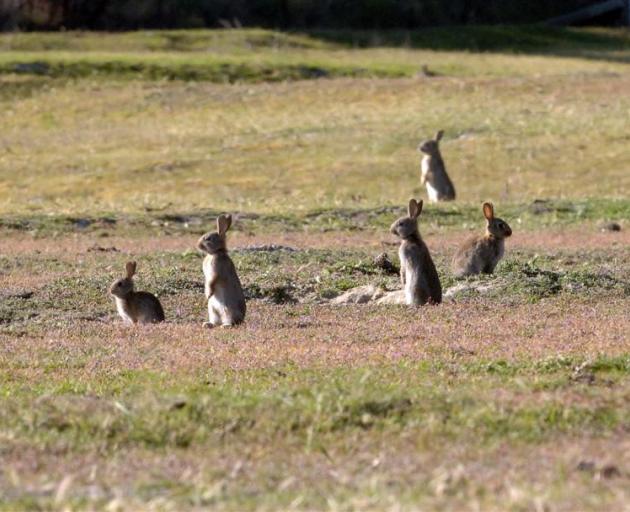 The release of a Korean variant of the calicivirus is due in three weeks. Photo: Stephen Jaquiery.
The groundwork has begun for the release of a new strain of rabbit virus now approved for use in New Zealand.

A Korean variant of the rabbit calicivirus will be released across the province in about three weeks.

None of the council's 100 doses of RHDV1 K5 have been released yet.

Approved for use last month, the virus will stimulate an epidemic that is expected to kill up to 40% of Otago's rabbit population.

Many have greeted the news with enthusiasm, but some have raised concerns.

A spray truck and a fixed-wing plane seen south of Dunedin had been linked to the release by a member of the public.

However, council environmental monitoring and operations director Scott MacLean said that was wrong.

"The bait is hand-laid, not aerial broadcast."

The pre-feed carrot was "simply cut carrot" and non-toxic and was being placed at release sites with high rabbit numbers to get the rabbits used to eating that food source.

"This will be repeated a week later. Then, a week following the second pre-feed, cut carrot with the virus applied, will be laid."

Most of the land in the programme was privately owned and the council would not disclose the exact locations of the operation for privacy reasons.

Concerned pet owners "need to seek advice from their vet".

Veterinarians across the region have reported more people were bringing their pet rabbits in to ensure they were vaccinated.

VetLife Wanaka also reported a "wee increase" in the past couple of weeks.

Oamaru Veterinary Centre veterinarian Sarah Boys said there had been a "wee influx" of people getting their rabbits vaccinated due to the awareness campaign under way.

"We see the normal calicivirus - probably each year we get a little outbreak of rabbits that pass away from calicivirus," she said.

Ms Boys recommended pet owners get their rabbits vaccinated "at least a couple of weeks before exposure".