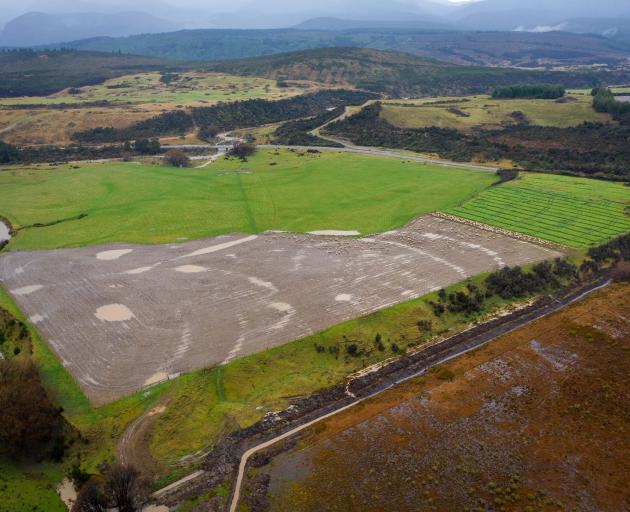 The posts, though, have brought a stern reply from some Environment Southland councillors.

Activist Geoff Reid took some photos of weather-worn Southland farms, some of which look to have been taken by drone.

"This farm is currently spilling runoff into a freshly dug trench that is draining a large peat wetland.

"Pollution is flowing into the Eglinton River and causing havoc in Lake Te Anau," he posted on Monday.

The topic itself was brought up at an Environment Southland meeting yesterday.

Cr Lloyd McCallum said social media was alive with discussion on the practice of winter grazing in Southland.

He knew it would come, but cautioned it needed a careful response.

"It’s very easy to light the fire but it’s hard to put it out sometimes."

He warned it would only get worse.

Cr Jeremy McPhail said, while attending a meeting with the Environmental Reference Group, there was a lack of understanding about Southland farms and wintering practices from some North Island farmers.

"They were making assumptions."

"I’ve been doing this practice for 35 years. I’ve done it all, made all the mistakes.

"I hear it quite often people don’t understand us in Southland, we need to educate people more."

"I’ve been farming a little bit longer than you. I’ve kept a good record of what happens."

"Ten days when the best practice still ends up with things that aren’t pretty."

He told councillors that in that year 13 Southland farmers committed suicide.

There was always a plethora of people posting to social media after a weather event such as on Monday, and he was not sure how to handle that.

"But that is the reality of farming in Southland."

Offering a non-farmer perspective, councillor Robert Guyton said he did not believe there would be any getting around it, unless there was significant land-use change.

He said that was unpalatable and was why people went to social media.

Hopefully the drone pilot had authority to fly and film over the affected property before complaining !

People like Geoff Reid are self appointed agitators that believe they are morally justified in condemning others. Their number is on the increase and social media gives them a voice, which is in turn amplified by mass media, that is out of proportion to their insights or expertise.
Even the current government and the CCC are incapable of grasping the basics practicalities of life in the real world.
Take the feebate scheme for EVs. When the country is dependent on imported coal to sustain electricity supply, every additional EV sucking from our grid is effectively burning coal. It is also escalating the house hold price for electric which effects the poor the most because they have the least insulated homes, yet I’m sure every new EV owner prides themselves on their concern for the planet and remains doggedly, wilfully blind to the facts
My thanks and respect goes to our farmers that feed humanity

I'm going to defend Geoff Reid, or debate what the "basics practicalities of life in the real world" are, and I am definitely not going to argue about the pros and cons of EVs. Instead, I will agree with you in giving thanks to ALL farmers who "feed humanity" and hopefully you will agree with me that we need to not only stop but reverse the pollution and environmental degradation that humans have done to this planet!

"Activist Geoff Reid", activist LOL, easy to moan when you are not in the thick of it.

Him or you? I think anybody who sees what they suspect is illegal environmental pollution should report it immediately.

Ashamed that your shoddy stock practices are being exposed? Stop doing them. Guess what Eric - in 1972 most farmers down here couldn't spell dairy. Now they want the place to be one huge factory farm. Milk processing plants burn coal (22 tonnes per hour at Clandeboye) so get your facts straight before you cast stones. It's not 1970, 80 or 90 - it's 2021.

I am surprised that nutrient rich runoff is toxic, have they not seen dairy farmers use it for fertiliser before?

If an adverse weather event leads to pollution because the environment can't handle the current farming practices during that event then surely the practices need to change. If it's bad enough to lead to so many tragic deaths by suicide amongst farmers then surely we all agree change is unavoidable. I value and praise the hard working individuals who feed us all but we must remember that our farming industry is primarily feeding others for export profit rather than feeding us. Surely we all need to work together to save both our environment and the lives of these farmers. We must find a way to change that is both financially productive and sustainable or better regenerative.

Unless you are part of the club profiting from this environmental damage you are not allowed to judge their actions. Oh and apparently flying a drone over farmland is a worse crime...