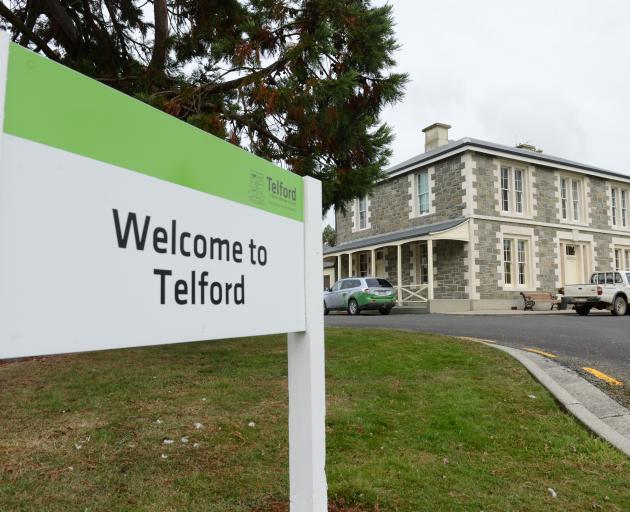 Telford, a division of Lincoln University, near Balclutha. Photo: ODT
The training institute running the Telford campus in South Otago has been placed in interim liquidation at the request of its board.

Taratahi, a private training establishment and agricultural education provider, runs residential campuses in Wairarapa and Reporoa in the North Island, as well as Telford.

It employs about 250 staff and boasted about 2850 students across all three campuses this year.

Today's announcement was made by David Ruscoe and Russell Moore of Grant Thornton, who were appointed interim liquidators by the High Court.

The liquidators, in a statement, said Taratahi was facing "financial and operational pressures caused by declining student numbers'', which had resulted in a reduction in funding.

It had invested heavily in student support and learning, while reducing operating expenses, but despite government subsidies and cash flows from its farming operations, costs still exceeded funding.

It reported a $7.3 million surplus in calendar 2017 on revenue of $22.8 million. Of that, $13.6 million came from the Tertiary Education Commission.

It also received a $2 million contribution from Lincoln University last year when it took on the Telford on-farm learning campus near Balclutha.

In 2014, Taratahi recognised an $8.7 million liability from over-funding of programmes between 2009 and 2014 following a TEC review.

In March this year, its banker Westpac was reviewing its facility with the education provider.

Taratahi's board considered interim liquidation as "the most responsible decision to protect the current and future position of its staff, students, creditors and other key stakeholders'', it said.

Board chairman Mavis Mullins said it was a "very distressing'' situation for staff and the board, which would have marked 100 years in 2019.

"Our main concerns are for our students, staff, animal welfare and our creditors and partners.''

Interim Liquidator David Ruscoe said he was working with the board and management, as well as government agencies, to provide "appropriate support'' for staff and students.

"Students will be contacted by Taratahi, the TEC and other providers and will be provided information about the options available to them for continuing their education.

"We understand that wages and salaries are up to date and funds are being received from livestock sales and Fonterra payments to keep the organisation running as per normal over the Christmas break.''

Education Minister Chris Hipkins said the timing of the announcement was "tough'', but support for students and staff was "our top priority''.

The Tertiary Education Commission (TEC) would work with Taratahi, NZQA and StudyLink to ensure students were supported, as would staff.

"We are taking steps to secure the home farm and we are talking to providers to fill the gap in provision for students. But what's clear is that the current model of vocational training for primary industry is broken.''

Agriculture Minister Damien O'Connor said he was also "incredibly saddened and disappointed'' by the outcome.

Clutha-Southland MP Hamish Walker said it was "a sad day for the primary sector'' and Telford, which had a "fantastic'' reputation.

"I'm hoping that Telford can be salvaged in all of this, so it can continue to feed the agriculture industry, which is so badly in need of more people.

"This is an awful blow so close to Christmas and my thoughts are with everyone involved.''