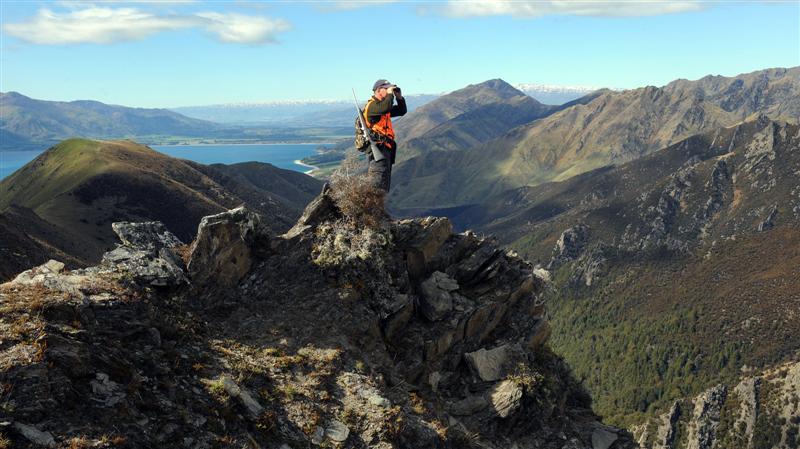 A hunter looks over Lake Hawea. Photos by Stephen Jaquiery.
Hunting tourism operator Richard Burdon is excited to finally welcome his first US visitors back to New Zealand after two years of Covid disruption.

His excitement quickly turned to frustration, however, once he heard how overseas travellers were experiencing delays due to a raft of "impossible" systems, including travel declarations.

"It's been a real struggle. They've arrived very wound up because the travel declarations that are required to be uploaded before they travel to New Zealand are really clunky and difficult."

Burdon and his wife Sarah are third-generation owners of high country station Glen Dene, situated on the shores of Lake Hawea, in Central Otago.

Outside of farming, the Burdons run a successful trophy hunting operation from Glen Dene, where overseas hunters can enjoy premium lodgings and backcountry hut experiences while they hunt.

Now, some of these hunters were left waiting for travel declaration forms to upload, Burdon told The Country's Rowena Duncum.

"We've had guys in business class that have had to wait five hours in airports that are just totally beside themselves."They've paid US$18,000 to travel here to enjoy New Zealand and the travel declaration form's just impossible to upload."

"The only way you can fill most of these forms out is on a home computer … it's just not working at all."

Burdon believed Air New Zealand needed more support from the Government in general "to get tourism back on its feet".

"We were promised by the Government that they would support tourism, and being closed for two years, we're just going through hell and back trying to get people to book.

"Sadly, we're getting people cancelling because they're so frustrated with the process."

The North American office hadn't opened this year, and potential visitors were being forwarded to a New Zealand office and told to wait for a response, Burdon said.

"People are not getting the credits that they've held for the last two years back for their flights and they're actually having to issue and pay for new flights.

"You'd have to be pretty keen to travel at the moment when you have to deal with the travel declarations and all the tests and extra costs that are going with it."

Burdon said people in the tourism industry were "beyond frustrated".

"Esplanade Travel, who we work very closely with, has not seen [anything like] this and they've been in the travel industry for 50 years.

"They just can't believe what is going on. It's so frustrating."

The hunting industry was close-knit and Burdon was concerned that word would get out and others would be put off coming to New Zealand.

"People travel here from all over the world, Australia, North America and Spain. The Europeans are not coming here; they're frustrated with the process."

The tourism industry had "waited patiently" for two years for the borders to open and Burdon was worried extra delays would now damage the reputation of "New Zealand Inc".

Overall, he said the process was "impossible".

"You can't get a visitor's firearms permit, people can't get connected with their travel agents, and the travel agents are not getting the support from Air New Zealand."

The pandemic had been tough on his own business as well.

"We've had over a million dollars a year taken out of our business and when the borders opened up, we had people lined up who wanted to come to New Zealand and they're just making it a damned miserable experience."

Burdon said he'd spent this week "trying to unwind" international travellers who had finally been able to visit Glen Dene.

"All they want to do is go home because they're so frustrated with the system.

"I've had grown men just about in tears. I just can't describe what I've been putting up within the last week. It's just beyond frustration."