Anthony Hampton. Photo: Tim Cronshaw
A Mid Canterbury farmer has built up a collection of 50 tractors. Most of them are vintage and one colour, writes Tim Cronshaw.

Red’s the colour of choice on Anthony Hampton’s farm.

With the exception of a smattering of grey, green and a bit of yellow trim, red is the livery of his large "Massey" tractor collection.

The grey refers to Ferguson tractors produced in post-war England before they too evolved to red when merged into the Massey production line.

"Massey Harris was always red," he says, "Well, right from the start they were green, and then they went to the red and yellow colour scheme so that’s what the bulk of the models are — red and yellow. And then of course Ferguson being part of the family, I’ve got a few of those."

The Lauriston-Barrhill grain and seed farmer spends most of his spare time restoring vintage tractors.

Meticulously rebuilding a 1936 Massey Harris Pacemaker took five years. This was combined from two frames brought home in a jumble of parts in the late 1980s on a trailer from a dairy farm near Leeston. 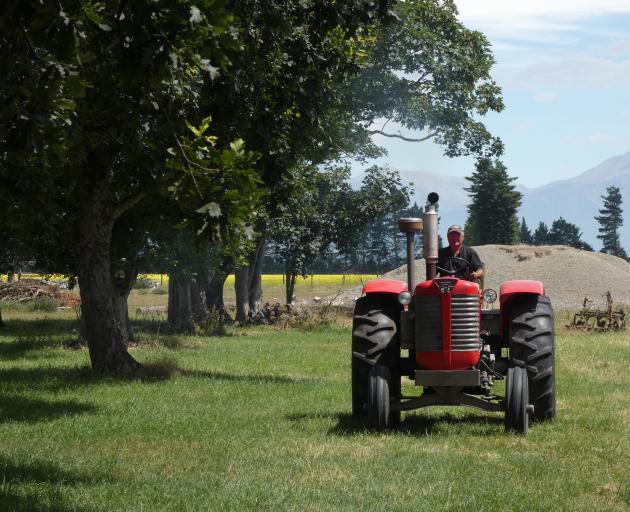 Vintage tractor enthusiast Anthony Hampton takes his 1964 100hp Massey diesel 97 out for a run. PHOTO: TIM CRONSHAW
"I worked on it on and off, not solid, rebuilding it into a tractor. It was a lot of work and of course it’s only a hobby so you have to do the work that pays the bills first. There’s not a lot of time during harvest so a lot of it is done at night. I go out after tea and that’s what I do — I’m not one to sit in a chair and this is my time out."

A four-wheel-drive Massey Harris dates back to 1931, and has two fuel tanks as it starts on petrol and runs on kerosene.

Next to this is his oldest tractor, a 1928 Wallis 12-20, with steel-spoked wheels and spade lugs at the rear. There’s probably only a handful left in New Zealand.

"The ones I know of there’s not many at all. Whether there’s more in the back of sheds I don’t know. There are not very many of them and not many Pacemakers either."

The Massey Harris name really got started in the tractor world when the company bought the rights to the Wallis tractor and called them a Pacemaker.

Mr Hampton has virtually every type of Massey Harris brought into New Zealand and has been known to bring the odd one over from the United States.

Some people play golf, breed dogs or watch television, but he prefers to work on tractors.

When his first Pacemaker arrived, he had only two or three tractors, but "iron disease" soon took a grip. 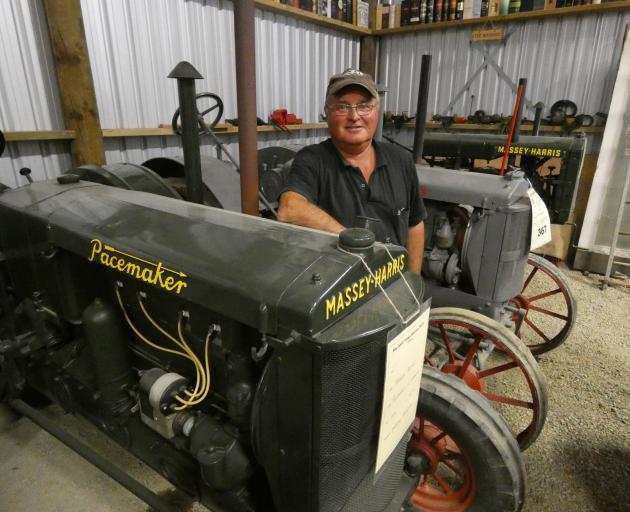 He quips there is no known cure.

"I’ve always liked machinery, always liked working on it, and repairing things. Probably about 30 years ago I started on the Massey Harris. I didn’t have a hobby and nobody wanted some of these old things. Some people said ‘just take them away’. They wanted rid of them way back then. I just thought that would be a challenge to try and get them going again."

Homed inside a large shed are about 30 immaculate vintage tractors in neat rows. Another five to 10 are in the project shed and there are a dozen red working tractors.

The oldest of his five grey Fergusons is 1947. They were first produced in England’s Coventry in 1946, arriving a year later in New Zealand, through to 1954.

One of them is a converted TEA with a single wheel in the front and its rear wheel axle narrowed for vegetable growing in Christchurch’s Harewood. Another TEA is a difficult-to-find vineyard model. 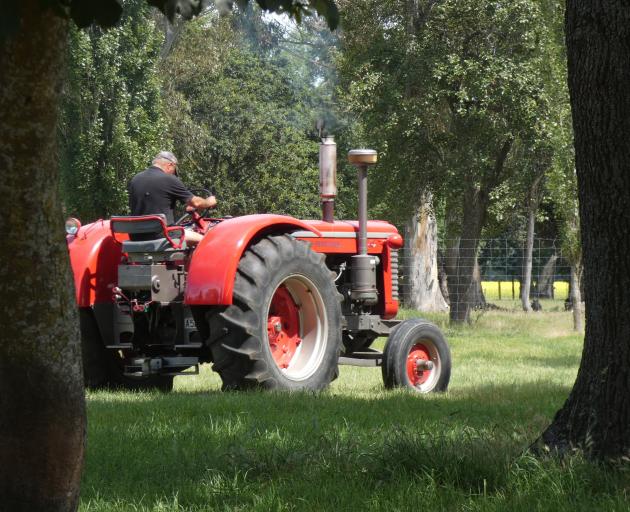 Not in his collection is a Ferguson Brown, the first Ferguson tractor ever produced. Just three came to New Zealand, with only one still around today. Several more have been imported into New Zealand for "huge money".

Mr Hampton favours Massey Harris, but rates the "Fergies" highly. They only had a smaller sized tractor, but were so reliable that many have survived.

He is working on a Massey Harris Mustang, complete except for the motor and he has had to order parts from the US. Also in the workshop is a Massey Harris 102 Senior, stripped down to newly painted chassis.

A couple of restoration rules are followed religiously — he does not sell or trade tractors, but has been known to help people out with parts. And he has a cap on how much he is prepared to spend on a rebuild.

His great hope is that his family will carry on the collection.

"Any tractor that comes here is a prisoner, it never leaves."

Promisingly, both sons, Mark and James, have shown interest in them. James works on the farm and runs a contracting business, while Mark has a farm machinery repair business.

Depending on a tractor’s condition, it receives a full overhaul if it has been worked too hard or a light "rustification" to retain its working patina. 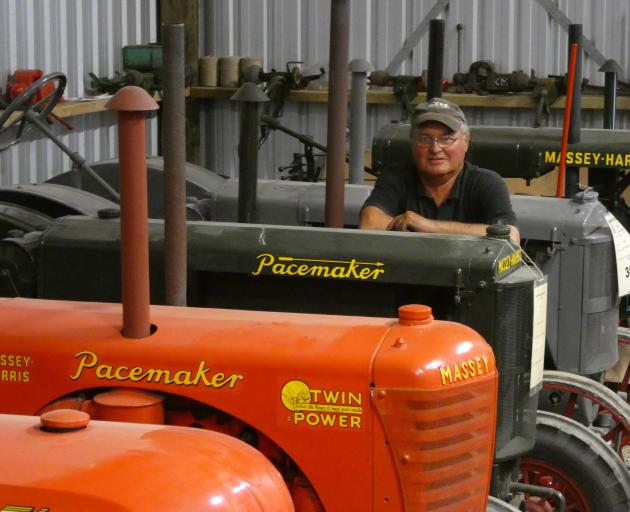 Tractor collector Anthony Hampton beside his prized 1936 Massey Harris Pacemaker and 1928 Wallis 12-20. PHOTO: TIM CRONSHAW
That is done in a workshop kitted out with welders, compressors and every tool needed to bring them back to life.

It is hard to fathom where Mr Hampton found the time for his hobby, for he is no idle farmer.

He bought his first farm a few years after leaving school. The 121ha dryland unit has since been incorporated into The Grange.

"I had to get the money off an insurance company because the banks thought I was too young. I had to take enough life insurance out to cover it, but I knew I wanted to go farming, even then."

Still working for his father on the nearby family farm, he saved money by using the same plant on his own property.

His first tractor was a second-hand Massey 178 from the early 1970s, bought from CE Bailey Ltd, the Massey Ferguson agency in Ashburton. With some regret now, he had to sell it to buy the next one.

"I wouldn’t know where to look to find it, but I’ve got a couple of 178s now. I always liked that tractor, so I bought a couple to make up for it."

Anthony Hampton has 570ha across three grain and seed farms.

The homestead farm is The Grange at Lauriston, while Cathcart is at Barrhill and a dryland block is at Highbank. He bought the family farm, Cathcart, off his brother about eight years ago.

Another full-timer works with them on the farms, with extra staff brought in over the harvest.

Wheat is the mainstay with between one quarter to a third of the farms in wheat each year. This goes to Champion Milling in Christchurch for use in New Zealand bakeries and other outlets.

Other crops include malting barley, processed and seed peas and ryegrass and clover for seed. Many vegetable seed crops have been grown over the years — including carrots, red beet and corn salad.

They have had good success without quite reaching the "boomer" yields, so he sticks to radish and mustard now.

Over the decades, wheat yields have averaged 10 tonnes to the hectare. This has been bettered some years, peaking to 13t/ha on a 14ha paddock.

The entire farm is irrigated except for the dryland block on "safer" country at Highbank.

Mr Hampton started putting in irrigation two decades ago on two farms which have since been merged and finished 10 years ago. After consulting with his accountant, he opted to dig three deep wells. They go down to 240m and came at a considerable cost with ongoing monthly power bills.

He said this still worked out cheaper than connecting to an irrigation scheme and he had full control of his water take, avoiding surface water cuts if the rivers got low during dry summers.

"I did one farm for a start and was one of the early ones to do it. I didn’t want to take too big a risk and do the whole lot in case it didn’t work. Once we saw the benefit of it a couple of years later I applied for another consent for another farm and it took me seven years to get it through ECan."

Normally 6000 store lambs are wintered, but 7000 were traded last year.

A kale seed crop was windrowed last week and the first paddock of ryegrass seed cut, but next month will be the business end when most of the crops ripen.

The spraying and fertiliser spreading is also done in-house and Mr Hampton even has his own seed processing plant and is export-certified.

The same DIY approach applies to his tractor restoration. Apart from getting the odd panel spray-painted or specialist engine job done professionally, he does the work himself.

The Grange was going to be the site of the Mid Canterbury Vintage Machinery Club’s Wheat and Wheels rally in early April, but was called off because of Covid-19.

Mr Hampton is club treasurer and began working on his crop rotations five years ago to have two 30ha paddocks of late wheat and grass beside each other for the event.

He was philosophical, but still disappointed that they would not be able to celebrate Massey’s 175th anniversary.

Part of the attraction of vintage tractors was the camaraderie of sharing stories with same-minded enthusiasts.

"You meet a lot of great people and there’s a lot of very clever people out there in this game. You just couldn’t pay someone and that’s the pleasure I get out of it — doing it myself and [being able to] look back after restoring a tractor and say ‘well I did that’,".