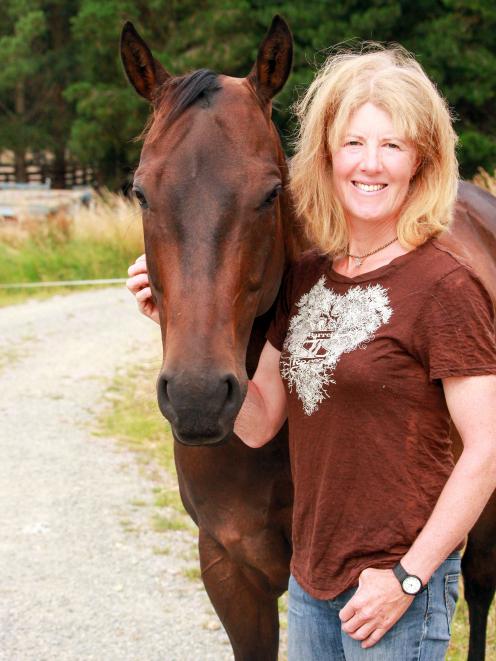 Horses have been a lifelong passion for Henrietta Purvis, who has won the innovation category in the NZI Rural Women New Zealand Business Awards. PHOTO: PAULA WILLIAMS/PRW PHOTOGRAPHY & DESIGN
Whether  about horses or lambs, alpacas or goats — Henrietta Purvis derives satisfaction from positive feedback from happy animal owners.

She and her husband Graeme Purvis operate Purvis Feeds from their Waianakarua property, south of Oamaru, selling lucerne chaff throughout New Zealand.

Very much a hands-on business owner who spends time both in the cutting shed and on the books, Mrs Purvis has been named the innovation category winner in this year’s NZI Rural Women New Zealand Business Awards.

Purvis Feeds has grown out of the couple’s shared love of horses — and the discovery of an old chaff cutter under a tree on a farm. It was the first brand in New Zealand to infuse chopped lucerne with cold-pressed rapeseed oil.

Starting very small, the business had grown organically as new customers came along and more lucerne growers came on board, Mrs Purvis said.

That organic growth was important — ‘‘the last thing we ever wanted to do was take on new clients without having the supply. There’s nothing worse than disappointing your market,’’ she said.

One of the first customers was prominent North Otago harness racing trainer Phil Williamson and, years later, he remained a client, along with his two sons who were also training racehorses.

Their product was now sold from Helensville to Invercargill and clients included leading horse studs and trainers.

In recent years, the couple had also seen a ‘‘dramatic’’ rise in other animals being fed chopped lucerne. It was growing in popularity every year with lamb and calf rearers, while there was also demand from the alpaca and goat industries.

Lucerne was sourced predominantly from Central Otago, which she described as the ‘‘Garden of Eden’’ of lucerne hay.

The region had ideal hay-making conditions, and the growers had a passion for producing premium hay, Mrs Purvis said.

The couple travelled widely, including to Italy, Canada, the United States, the United Kingdom and Australia, looking at various ways of drying hay, chopping chaff, marketing, different types of chaff and how other countries used and fed it.

They got the idea of infusing chaff with oil from the UK and launched the product after extensive research and trials.

Purvis Feeds now employed two staff members, as well as the couple, and when it came to future plans, Mrs Purvis said they were ‘‘just to carry on doing what we’re doing’’.

‘‘Obviously, we are expanding.

‘‘Every year we’ve tried to get a bit bigger and a bit better without losing our core values,’’ she said.

It was so easy to be proud of their product as there was so much ‘‘lovely feedback’’ from animal owners.

Apart from that, she also liked being able to provide a growing market for lucerne-producing Central Otago farmers and rapeseed growers in North Otago and South Canterbury, she said.

English-born Mrs Purvis moved to New Zealand in the early 2000s. Prior to that, she had her own catering business based at Lambourn, a major horse racing centre.

She had a roster going around the racing yards in the morning with a van, providing food.

The busiest time at Lambourn was spring, summer and autumn and then after Christmas. January and the beginning of February was the quietest time, which worked in well with coming to New Zealand to visit her brother Richard Subtil and his family at Omarama Station.

It also meant that she helped out with weaning and it was through that she met her future husband — himself involved with rodeo — who was operating a sheep conveyor.

With a lifetime involvement with horses, including hunting and eventing, she had never seen a rodeo until she was in New Zealand. She looked at the barrel racing and thought, ‘‘that looks easy enough — I could do that.’’

Barrel racing was now her passion and she had enjoyed considerable success with her quarterhorse Midge, who was named barrel racing horse of the year in 2013-14.

Now campaigning Playtime, Mrs Purvis said rodeo was a great hobby that the couple could do together, on equal terms and supporting each other.

This weekend, they competed at Winchester and Methven rodeos.

She had seen publicity about the Rural Women New Zealand Business Awards over the years and wondered if she could do that.

This year seemed to be the right time to enter and ‘‘showcase’’ their business.

She did not realise at the time how much more insight it would give her into her business.

Preparing her entry, she had to look at it from an outside point of view — ‘‘we know it inside out’’ — but she had to tell their story to complete strangers, and that had been very beneficial.

It meant they looked closely at their business and also the role she played in it, Mrs Purvis said.

The business was constantly evolving and changing — ‘‘nothing ever stays the same’’ — so it was like a snapshot in time, she said.

In latter times, Mrs Purvis has been moving out of the shed to work more on the business rather than in it.

She was thrilled to win the award, quipping that the truck driver who pulled in after she received the congratulatory letter encountered a ‘‘very excited woman’’.

She will head to Wellington for a function on November 20, where the category winners will receive their awards and an overall supreme winner will be announced.

Personal experiences helped contribute to Mrs Ivey’s decision to launch a business; she had experienced fluctuations with both weight and self-esteem and put on a lot of weight during her pregnancies.

Living on a high country property, she realised there were probably many other rural women like her who struggled to make time for themselves due to their locations and busy lives.

Kate Ivey Fitness was created in 2016 with a series of e-books and, the following year, she launched DediKate, an online health and fitness community and app.

It now had more than 1400 members and workouts were streamed from her home at the eastern end of Lake Pukaki and surrounding spectacular Mackenzie district.

Other category winners were.—