On their farm in Clinton are (from left) Elaine McKenzie and her granddaughter Eve (14), son Scott, husband Colin, and son Ryan. PHOTOS: SHAWN MCAVINUE
There’s no I in team and no A in McKenzie.

Colin McKenzie’s family have been farming and improving the same land in South Otago for more than a century.

His great grandfather, David MacKenzie, emigrated from Scotland in 1863, aged 21.

After a stint goldmining in the South and working as a farrier in Milton, he bought a 40ha sheep farm in Waiwera South, east of Clinton, in 1875.

After making the move to farming, he changed his surname to McKenzie because another David MacKenzie lived in the district and it was causing confusion.

Kenny sold the family farm in Waiwera South, which was now about twice its original size , to buy a nearly 150ha dairy farm in Hillfoot Rd, Clinton, in 1920.

Colin’s wife, Elaine, said the family planned to celebrate 100 years of farming in Clinton in July 2020, but the party was cancelled due to Covid uncertainty.

"We had the hall booked and were going to do big things — then Covid hit."

After lockdown the same year, just the family had a small celebration at The Oak Tree Inn in Clinton.

A couple of years after Kenny bought the dairy farm in 1920, he decided to change to sheep and beef.

The decision to change was partly because his two teenage daughters, who helped milk the herd, had left the farm, Colin said.

Colin’s father, Arthur, took over the sheep and beef farm in 1947.

The farm was run as one entity but was split into two nearly even-sized blocks.

Colin and Elaine’s sons, Scott and Ryan, each run a block.

Romney were the first mob of sheep run on the farm. 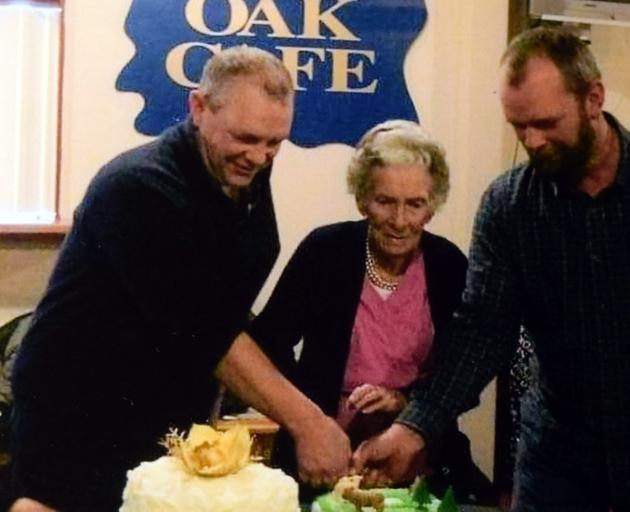 Cutting a cake at The Oak Tree Inn to celebrate 100 years of farming the same land in Clinton in 2020 are Peggy McKenzie (nee Wilson) and her grandsons Scott (left) and Ryan McKenzie.
A second mob was created by introducing Cheviot genes to breed a "tougher" Perendale sheep to run on when more hill country was bought.

The forestry block began when Colin and a friend invested in planting about 80ha in pine forestry on nearby hill country, about 40 years ago.

Colin made some money selling shares before the stock market crash in 1987, freeing up capital to buy a 400ha block, which included the pine forest block.

Scott said the forestry on the farm was mostly pine, with some Douglas-fir, macrocarpa and eucalypts.

Forestry accounted for about a third of the farm income because the family did their own logging.

The family had twice considered returning to dairy farming.

Colin started the paperwork for a dairy conversion about 30 years ago and Scott did the same about a decade ago, but neither went through with it.

Sheep and beef farming suited them better, as they preferred to do the work themselves, rather than relying on staff.

Scott’s block includes land once covered in "gorse, rocks and stuffed fences", which they started developing in the mid 1990s, Scott said.

Ploughing paddocks had increased productivity on the farm.

Scott, a two-times national ploughing champion, was set to represent New Zealand in ploughing in Russia in 2020 but Covid-19 stopped him going.

Engineering was in the blood, the family preferring to make farm machinery rather than buy it.

When Southern Rural Life visited, Colin was fixing a starter motor for a tractor, which runs a wood-splitter they made.

Colin’s other engineering feats include the McKenzie side-pinning for capless wool packs, which he created in the late 1980s. The technology allows wool bales to be pinned closed, rather than sewn, to make the process quicker and reduce the chance of contamination.

Colin also attempted producing an upright shearing platform but The New Zealand Wool Board declined to invest in research and development.

Scott still thinks it’s possible to design a better platform for shearing a big sheep inside.

"I think about it regularly — there’s more than one way to skin a cat."