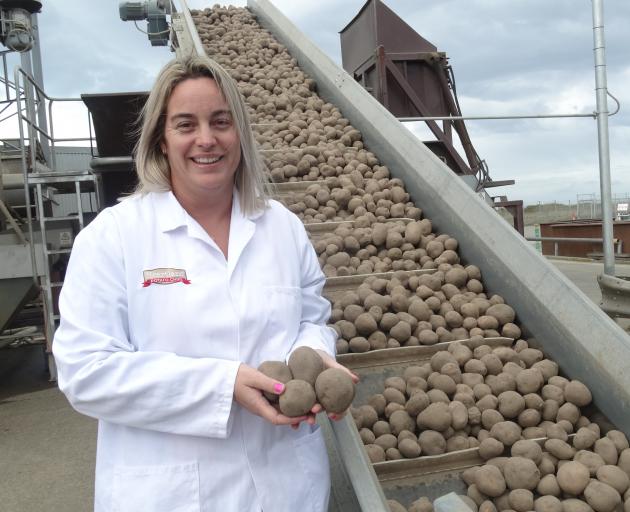 Charlotte Bowen checks out some potatoes at the Washdyke factory. Photo: Chris Tobin
Charlotte Bowen has fond memories of hand-picking potatoes, then bagging and selling them at her parents' farm gate.

Today she is still in the selling game, but it is potato chips and in much bigger volumes.

Miss Bowen is general manager of Heartland Potato Chips Ltd, in Washdyke, but prefers to say she oversees the operation.

She is doing a good job, as evidenced by her success in winning the emerging leader award at the 2019 South Canterbury Chamber of Commerce Business Awards recently.

''I was blown away; I went on the Friday expecting nothing and I was up against so good competition.

''When my name was called out, I was unprepared.

''It's a great honour to receive and I wouldn't have been in that position unless my parents took the risk and created Heartland.''

The company started nine years ago next month after Miss Bowen's parents decided to take up where giant company Bluebird left off.

After operating at Washdyke for some years, Bluebird pulled up stakes and relocated to Auckland.

Raymond Bowen supplied potatoes to Bluebird and with the big company's departure, he and wife Adrienne saw an opportunity.

They investigated starting their own potato chip business.

''Dad wondered for a start if he'd put the factory on the farm but consents were already in place here.''

The old Bluebird factory was bought, Mr Bowen sourced equipment and machinery and, supplied by potatoes from his own farm, Fallgate, the Heartland Potato Company was up and running.

But Miss Bowen did not join them until later.

She took a different path, moving into teaching.

''I went to teacher's college and had my first job in Wellington, then went overseas and taught in Perth before having my first child.

''I came back here and relief-taught at Timaru Girls' High School and came in here helping out in the office.

''As time progressed, Dad put it to me, would I be interested in working here?''

After taking some marketing papers, she said yes and five years ago she became general manager, or, as she prefers, the person who oversees everything.

That is a challenge in itself.

''I need to make sure we have a financial budget for the year, working along with sales and closely with our farm, which is our only supplier. We have to project what potatoes we need, and I look closely at new product development.''

There is strategic planning also.

''We have a five-year business plan and I check all the financials, making sure the warehouse production is doing what it's supposed to, and I do all the on-farm accounts as well.''

Her father is based at the farm and is still active in the company, keeping an eye on things while her brother James runs that end of the operation.

The potato crops are planted in September and picking runs from about February through to Easter, before frosts hit. Bulk storage is kept at the farm as well as the factory site.

The company remains in good heart, but competition is tough.

''We're up against competitors with flexible pricing.

''We had to go in with a point of difference.

''Our point is being gluten-free and we don't use palm oil. And we've got the whole story, being farmer-owned and operated from the paddock to the packet.''

Being a small player, it faces a challenge getting into supermarkets, but she says they have ''a great presence'' selling around the South Island and have moved into the northern market as well.

''It would be great to see it continue in the North Island.''

And what is her favourite potato chip?