By Riley Kennedy
0 Comments
It was not the next career move Hayden Spelman expected to make.

The farm worker has left the agricultural life behind to run a hairdressing business with his mother, Hannah Spelman (47).

In July, 26-year-old Mr Spelman saw an opportunity to buy Hair Hunters, a barbershop in George St, Dunedin, and convinced his experienced hairdresser mother to go into business with him.

Just four days after viewing the business, the mother and son duo’s offer was accepted and they took over the business on August 1, two weeks before the latest lockdown.

"Once I get an idea in my head, I just try to make it a thing," Mr Spelman said.

The Spelman family emigrated to New Zealand from England three years ago and settled in Dunedin.

Mrs Spelman, who was a hairdresser in England for 31 years, owned her own salon.

"I didn’t think I’d own another one again," she said, laughing.

Before becoming one of the new owners of Hair Hunters, Mr Spelman worked on a Taieri dairy farm and Mrs Spelman cut hair at another local barber shop. 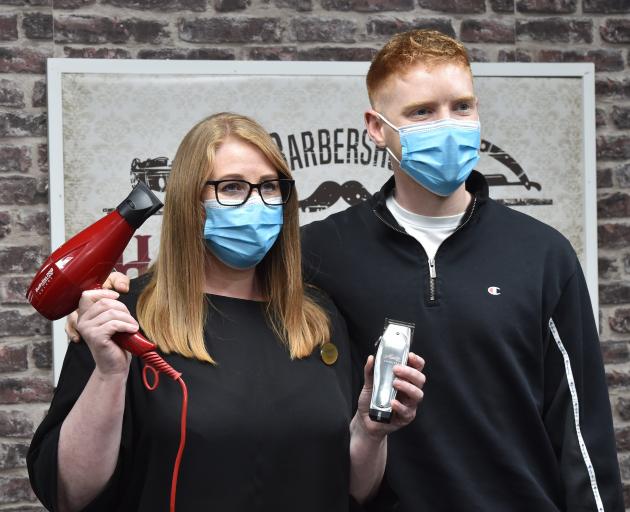 Mother and son duo Hayden and Hannah Spelman became the new owners of Hair Hunters two weeks before the latest lockdown. PHOTO: GREGOR RICHARDSON
After studying agriculture at university and working on farms overseas, Mr Spelman admitted owning a barber shop was not where he thought he would end up.

"It is a bit of a switch up but watching mum cut hair and working in various places have given me a good insight."

There were not many similarities between dairy farming and hairdressing.

"What farming has given me is massive life skills. It’s unpredictable and has made me a problem solver," Mr Spelman said.

The pair believe they are the perfect combo, with Mr Spelman running the books and Mrs Spelman doing "the cutting and talking".

At first it was an "intimidating move with a few sleepless nights" but the last few months had been great, Mr Spelman said.

Before the lockdown business was "going really well" and they were "gutted" it happened so quickly, Mrs Spelman said.

"It was on the cards that it might happen again, so we did some research about it and felt reasonably confident about it," she said.

During Alert Level 3, the pair, who were in the same bubble, did some renovations to the shop.

Once the shop reopened it was booked out with lockdown-delayed haircuts and remained very busy, Mrs Spelman said.