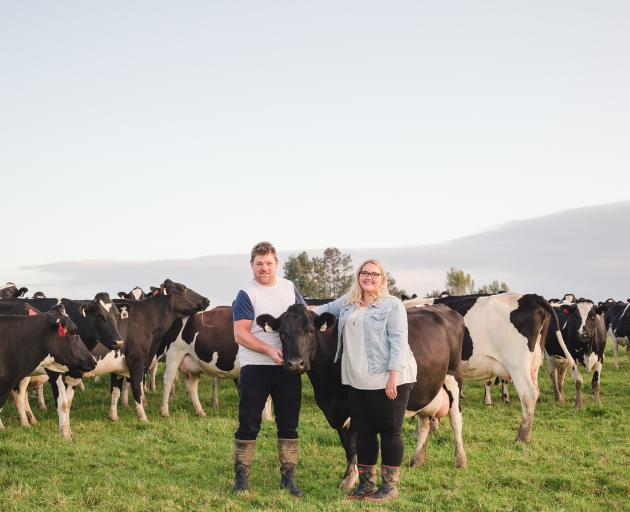 Time on the farm means more to contract milkers Allesha Ballard and Thomas Conway, of Dacre, since she tested positive for inherited cancer-causing gene CDH1. PHOTO: HEIDI HORTON PHOTOGRAPHY
Allesha Ballard feels like her life is on hold as she waits for a date for surgery to have her stomach removed.

As she waits, life on a Southland dairy farm has become even more important.

The Dacre contract milker decided on the operation after she and her two siblings tested positive for the inherited cancer-causing gene CDH1.

She and her brother, Josh Ballard, and sister, Melissa Thompson, had watched a programme about singer Stan Walker, who had inherited the gene and later developed stomach cancer, then had his stomach removed.

"We thought we should look into it a bit more and we found a lot of family members have died from related cancers," Ms Ballard said.

"We all were happy to get tested for it, as we had watched Dad suffer from this horrible stomach cancer and knew if we didn’t take the next step now it might be too late for the future."

Melissa had her stomach removed at the start of November and Josh had his in September.

The surgeon connects the intestines to the oesophagus so Ms Ballard will need a high protein, low sugar diet with daily supplements for the rest of her life.

It also means if she and partner Thomas Conway want children, they will have to go through IVF to test the eggs for the gene.

The couple are in their fourth season as contract milkers on a 350-cow, 123ha farm and Ms Ballard is also a photographer.

Ms Ballard does the calf rearing, administration work and helps out when needed. The couple are self-contained with a run-off block five minutes down the road where they winter graze and run young stock. They also do their own ground and crop work.

Following blood tests for the gene, the doctor told her she had it, on September 16. She immediately went to the cow shed and told her partner.

"That was the hardest part, having to say it out loud to someone.

By having the operation she has a chance to manage her risks, she said.

"I get so much joy from our lifestyle — living on the farm, the freedom to be outside when you want, listening to the morning birds and watching the calves run around the paddocks.

"I am more than my inherited genetic cancers and I can beat this.

"It makes it a lot easier knowing that if my siblings can get through this, so can I."

She encouraged anyone who noticed any change in health to be tested.

"If this could prevent another family’s journey [like ours], that would make me really happy."