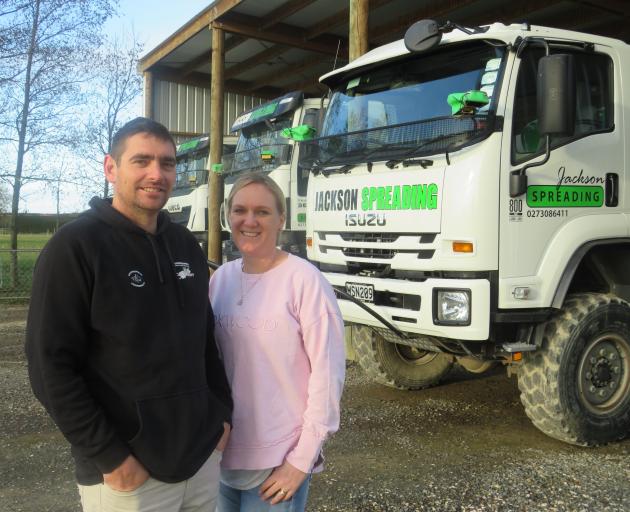 Jon and Anna Jackson have been refining the use of technology by their company, Jackson Spreading, to benefit farmers nationwide. PHOTO: TONI WILLIAMS
Jon Jackson’s desire to do things better, smarter and more efficiently has earned him a national award.

He was named the Keith Andrews Trucks Innovation Award winner recently in the Groundspread New Zealand industry awards in Wellington.

Mr Jackson, of Jackson Spreading, in Ashburton, is familiar with the innovator’s journey of trial and error, as well as the knockers and naysayers, but said he rose above it all because he wanted to improve processes to benefit his farmers.

He was the first contractor in New Zealand to use nitrogen-optical sensors and openly shared his knowledge of variable rate application with other contractors.

But he also had the drive to create another improvement for the benefit of all in the groundspreading industry.

It started from a newspaper clipping given to him by his wife’s grandmother.

It was of a technology being developed by Pastoral Robotics Ltd to get more out of fertiliser, for the betterment of the environment.

He flew to Rotorua to take a look at the system, aptly named Spikey, being used on-farm.

It detected fresh urine patches and applied a treatment to reduce nitrate leaching.

He then worked with the company to meet groundspreader demands.

It was a significant investment in new technology that would help expand his customer base and was good for farmers at the same time, he said.

Spikey is now a stronger version 3.0 and Mr Jackson is an ambassador for the technology, promoting it to his peers and farmers alike. 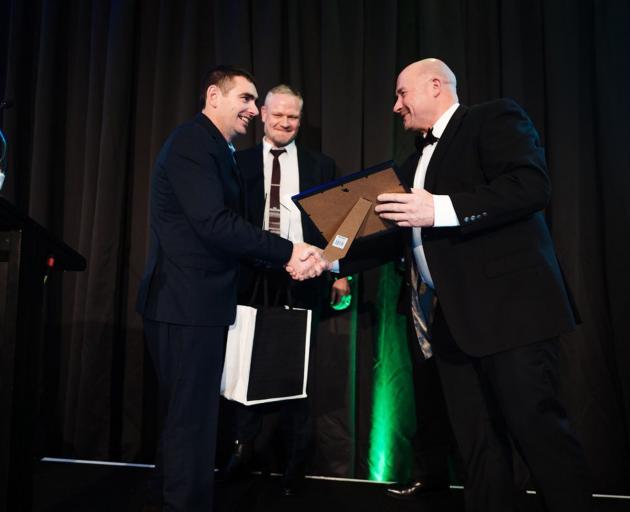 Jon Jackson (left), watched by Erwin Stolze, of Keith Andrews Trucks (Hamilton), is presented with an innovation award by Grant Anderson, of Groundspread NZ. PHOTO: SUPPLIED
It is only commercially available in Rotorua and Mid Canterbury, but there is plenty of nationwide demand.

There are plans to extend the 8m-wide span to 12m for even greater efficiency.

"There is more demand than we can meet, but the aim is to build one to two units a month," he said.

Mr Jackson uses Spikey in the family business, owned with his wife, Anna, and his parents Alan and Alison.

Mr Jackson sen bought the business starting with one truck in 2013, and a year later Jon joined him.

He backed the Top Con camera sensors so much he became a dealer.

Jackson Spreading’s Spikey operator, Ashlee Poulter — who is also known as "Spikey Queen" — was a runner-up in the young achiever awards in this year’s Groundspread NZ industry awards, as was fellow Mid Cantabrian Kane Freeman.

Mr Jackson, who is highly regarded by his fellow groundspreaders for his selfless ambition and knowledge, believes in the Spreadmark fertiliser placement quality assurance programme using certified companies.

"If you’re not doing it right, there is no point in doing it," he said.

Groundspread New Zealand president Graeme Martin said the awards recognised people who had made a significant and positive contribution to the groundspreading industry.

They highlighted the essential role groundspreaders played in the food production chain in New Zealand.