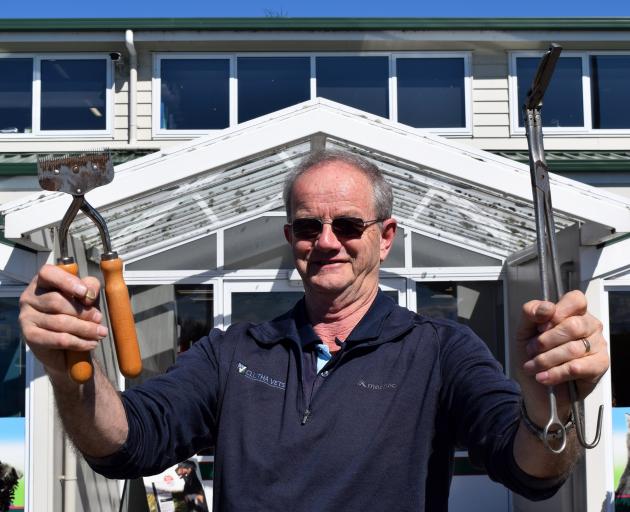 His interest in the industry was sparked as a child, after seeing vets work on his family farm in Mid Canterbury.

After graduating with a veterinary science degree from Massey University in 1975, he set two criteria before applying for his first vet job.

He would only consider working in a mixed practice, where he could diagnose and treat illnesses affecting a variety of species, and it must be in a small rural town in the South Island.

He started at Clutha Vets in South Otago in January 1976 and retired there on Friday last week — ending a career three months shy of 46 years.

When he started he joined a team with three other vets — Jim Mathieson and Hugh Montgomery in Balclutha and Bruce Bissett in Milton.

Now the practice has more than 20 vets.

The jobs on his first day of work included treating a lame cow in Otanomomo and a horse with a cut leg in Ahuriri Flat.

After a month of living in Balclutha, he met local girl Lois (nee Henderson) and they married in May 1977.

Mrs Smart was a nurse at Balclutha Hospital.

"I became an expert scrounger of equipment they didn’t want and could use here. We got a bloody good surgery light and some X-ray tanks."

He acknowledged his wife and children playing an integral part of the running of a rural practice, including taking emergency calls and helping on jobs.

A life of a vet on-call meant he had to miss some of his children’s birthdays.

The veterinary profession had changed a lot since he started.

Once work vehicles included a Pye Cambridge radio telephones (RT). If the RT was left on overnight, the battery in the vehicle would be flat by the morning.

"Jim Mathieson and I always seemed to be having to push start each other at the clinic."

One of the calls he took over his RT was to go to a circus in Kaitangata to help a pregnant lion having difficulty birthing cubs.

"Apart from knowing which end of a lion is the sharp end, my lion knowledge would fit on the back of a matchbox, but I did know enough to work out that it wasn’t having cubs — I don’t think it was even pregnant — but I have ‘putting my hand up the back end of a lion’ on my CV."

Another callout was to help rescue about 15 cattle trapped in a shed up to their necks in floodwater.

He and Mr Mathieson were taken to the shed by jet-boat and spent several hours standing in more than a metre of cold water, sedating the cattle so they could be helicoptered to dry land.

"I don’t think I have ever been so frozen in all my life."

After the job was done, someone gave him a whisky to warm up.

"It never touched the sides."

He had created a museum cabinet at Clutha Vets of obsolete tools and medicines which shows the large leap in the profession.

Spay scissors displayed in the cabinet, which he had once used, would never be used today, he said.

Another change in the industry was prevention being better than the cure, such as blood-testing a lamb for its B12 levels and giving it a supplement, rather than waiting for it to get thin before treating it.

He recalled when disease Salmonella brandenburg arrived in the South in the late 1990s.

The devastating disease caused abortion and deaths in ewes — only on farms south of Amberley in North Canterbury.

He recalled a Southern farm hit by the disease having 1000 ewes abort and 600 ewes die.

"It caused a huge amount of death and destruction."

People could also get "really crook" from the disease.

He made a presentation about the disease at the International Sheep Veterinary Congress in South Africa.

He oversaw two major building projects of clinics in Balclutha and Lawrence and coming in under budget for both.

A highlight was being the president of the International Sheep Veterinary Association for four years from 2013.

In retirement, he intends to travel more in his campervan, spend more time with his grandchildren and in his garden.