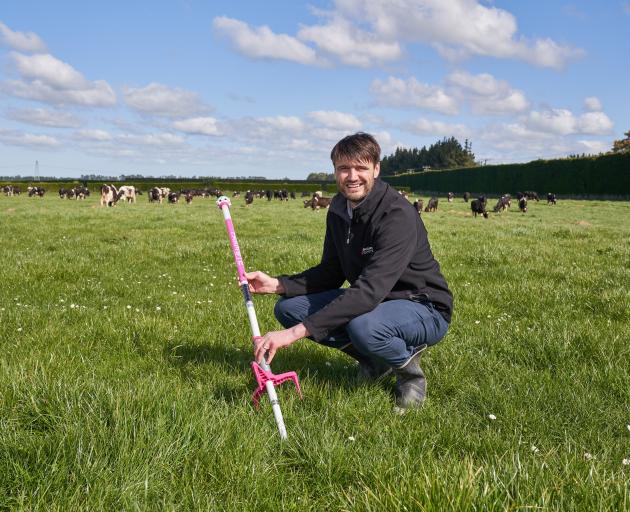 The Farmote system has just become available to Canterbury farmers, and will eventually go nationwide.

Mr Barton grew up on a mixed farm outside Timaru and became familiar with measurement technology as a design engineer in the pharmaceutical industry.

He said there had been many challenges to overcome over the past five years, including making it cow-proof.

“Our biggest problem was bored cows. They would play with [them] until they broke them. You put something in a paddock with cows, and every single one of them wants to lick it, or chew it, or rub against it.”

Each device has a hollow plastic pole, topped by a sphere the size of a tennis ball, and is mounted year-round in a paddock.

Mr Barton said they developed a spring mechanism after many experiments so it popped back up and plastic nodules on the pole prevent cows from using it as a scratch post.

The system automatically brings together data collected from its position with satellite imagery to give daily pasture measurements.

About 60 of them were tested on Canterbury dairy farms over the past three years, and also in Manawatu and Waikato.

Mr Barton said this would save farmers hours of measuring pasture growth manually and provide them with a better result.

Farmers recognised the value of managing pasture but often struggled to find time to do it.

He said other tools could be time-consuming, and results varied depending on the operator, while new satellite-based systems were affected by cloud cover and time-lag.

This system was the only one with a device in the ground, and this took thousands of measurements overnight, he said.

This was combined with day-time monitoring by five-band imaging from a satellite which had only become widely available this year.

The pole has solar-powered electronics and batteries and the sphere uses infra red light and optical sensors. The prongs securing it to the ground have soil moisture and temperature sensors.

Dairy farmers are first in line for the technology, but it will eventually go out to red meat and arable operators.